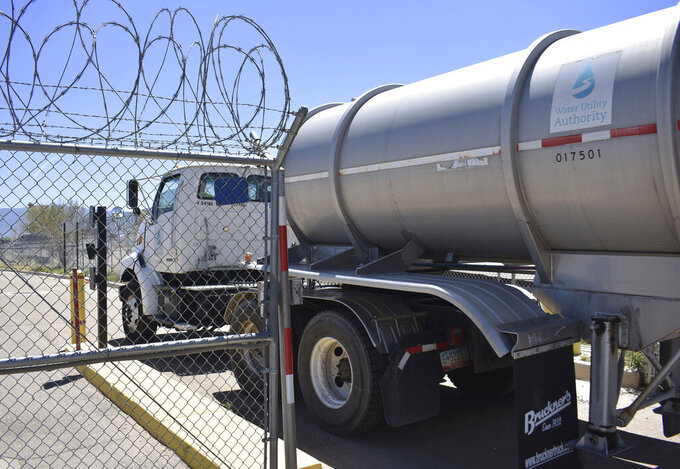 A truck hauling an emergency water tanker trailer is dispatched from the Albuquerque Bernalillo County Water Utility Authority in Albuquerque, New Mexico, on Monday, May 4, 2020. The tankers will be used to serve members of the Navajo Nation who no longer have access to drinking water due to an emergency declaration that limited traffic into the city of Gallup, N.M., due to the coronavirus outbreak. (David Morris, Albuquerque Bernalillo County Water Utility Authority, via AP)

PAGE, Ariz. (AP) — Navajo Nation President Jonathan Nez called on elected officials in reservation border towns to work with the tribe to combat the coronavirus after one mayor made a comment he said was insensitive.

The Navajo Nation has been hit harder by COVID-19 than any other Native American reservation and has one of the highest per capita rates in the country. As of Saturday, 2,292 people have tested positive and 73 have died.

Levi Tappan, who is mayor of nearby Page, Arizona, and isn't Native American, posted a comment online over the weekend that said, “I wish he would battle alcoholism as hard as COVID19.” It came after Tappan wrote a letter to Nez asking if he would consider reopening some popular recreation areas on the reservation.

The comment has since been deleted, and Tappan apologized.

“I know he’s devoted a lot of resources to combating COVID-19, and I think when the number settles, it will show that alcohol is still far deadlier for our residents, and so I just wish that we could work with those kind of resources on all of our diseases,” Tappan said Sunday.

Alcoholism is one of the largest social ills on the 27,000-square-mile (70,000-square-kilometer) reservation that reaches into New Mexico, Arizona and Utah. The sale and consumption of alcohol largely is banned there, fueling bootleg operations or leading people into border towns that are hubs for basic household supplies, alcohol sales and water hauling stations.

Albuquerque was sending water tankers to Gallup on Monday, a much smaller New Mexico city about two hours west on the fringes of the Navajo Nation. Gallup is on lockdown until Thursday to prevent nonessential travel after a rise in coronavirus cases was linked to an outbreak at a detox center.

For most people, coronavirus causes mild or moderate symptoms. For some, especially older adults and people with existing health problems, it can cause more severe illness, including pneumonia, and death.

Nez said Sunday that he recognizes alcoholism is a problem and has heard from Navajo citizens who are worried that family members afflicted by substance abuse aren't practicing social distancing or other measures to prevent the coronavirus.

He said Tappan's comments have far-reaching implications and urged him to be more respectful of the relationship between Navajos and the city of Page.

“We, as elected leaders, should be working together to unite our people especially when we are losing so many relatives to COVID-19, not tearing each other down and singling out Native Americans in regards to alcohol issues," Nez said.

Tappan said he would meet with Nez later this week when Nez's administration distributes food, water and other supplies to Navajo communities near Page.

This story has been corrected to show that Navajo Nation President Jonathan Nez's comments came Sunday, not Monday.