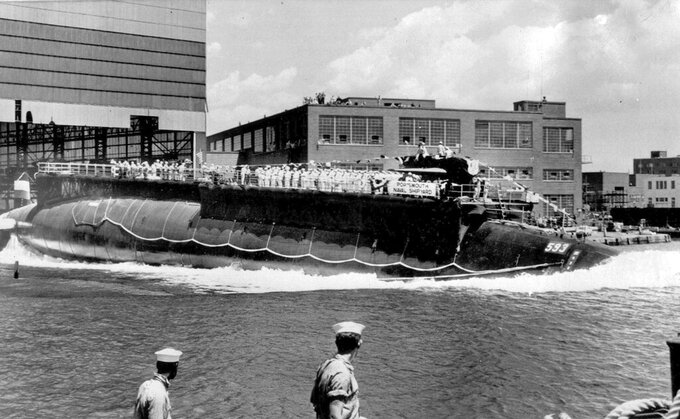 FILE - In this July 9, 1960, file photo, the U.S. Navy nuclear powered attack submarine USS Thresher is launched bow-first at the Portsmouth Navy Yard in Kittery, Maine. The Navy is releasing documents from the investigation into the deadliest submarine disaster in U.S. history. A judge ordered the release of the documents that pertain to the sinking of the USS Thresher 57 years ago, and the first batch was made public on Wednesday, Sept. 23, 2020. (AP Photo, File)

PORTLAND, Maine (AP) — The Navy began releasing documents from the investigation into the deadliest submarine disaster in U.S. history on Wednesday, but the Navy said the documents released under a court order don’t shed any new light on the cause of the sinking.

The first of the documents released were 300 pages from the official inquiry into the sinking of the USS Thresher on April 10, 1963.

The loss of the nuclear-powered submarine and all 129 men aboard during a test dive in the Atlantic Ocean delivered a blow to national pride during the Cold War and became the impetus for safety improvements.

“The loss of Thresher was a defining event for the submarine service,” said Rear Adm. William Houston, director of the undersea warfare division in the office of the chief of naval operations at the Pentagon.

The Thresher story was already well known. It had undergone sea trials and was back in the ocean for deep-dive testing about 220 miles off Massachusetts’ Cape Cod.

The first sign of trouble was a garbled message about a “minor difficulty” after the 279-foot (85-meter) submarine descended to more than 800 feet.

The crew indicated it was attempting to empty ballast tanks in an effort to surface. The crew of an accompanying rescue ship heard something about the “test depth.” Then the sailors listened as the sub disintegrated under the crushing pressure of the sea.

The Navy inquiry found weaknesses in the design and construction of the first-in-class nuclear-powered submarine, which had been built at Portsmouth Naval Shipyard in Kittery, Maine, and based in Groton, Connecticut.

The documents released Wednesday included the timeline of the sinking, evidence lists, reports, testimony and correspondence. But there were some redactions. Even more than 50 years later, technical details including the test depth were redacted.

In the documents, the Navy said it believes an interior pipe burst and caused electrical problems that caused an emergency shutdown of the nuclear reactor.

Resting on the ocean floor at a depth of 8,500 feet, the Thresher looks as though it went through a “shredding machine” and is spread out over a mile, University of Rhode Island oceanographer Robert Ballard told The Associated Press in 2013. Ballard used his 1985 discovery of RMS Titanic as a Cold War cover for surveying the Thresher.

Not everyone was satisfied with the Navy’s conclusions.

Retired Capt. James Bryant, commander of a Thresher-class submarine, requested the documents under the federal Freedom of Information Act and ultimately went to court to demand the documents’ release. He thinks there’s more to be learned from the documents, most of them classified.

Michael Shafer, whose father and uncle both died on the Thresher, said some of the families need to review the documents to see for themselves and fully understand what happened. His suspicion is that the Navy was pushing the limits and placing personnel at risk during the Cold War.

“I want to know the truth, the whole truth. Not some smoke screen from the Navy,” he said Wednesday from St. Petersburg, Florida.

A judge in February ordered the Navy to release the documents. The coronavirus pandemic delayed the review of the documents. Eventually, more than 1,000 pages of documents will be released.

If there was a silver lining, it was that the tragedy so shook the Navy that it accelerated safety improvements and created a program called SUBSAFE, an extensive series of design modifications, training and other improvements.

One submarine has sunk since then, the USS Scorpion in 1968, and it was not SUBSAFE-certified, the Navy said.

Some of the improvements included better welding techniques and changes to the ballast system that allows a submarine to surface.

Joy MacMillan, one of four siblings who lost their father, the submarine’s chief radioman, said it’s helpful to know the deaths spurred safety improvements. But it’s still important for the families to have the documents, and some closure.

“After being 57 years in the dark, it’s time for the families to know any and all information so that we can put it away. We can say, ‘Mistakes were made. Let’s move on,’” MacMillan, of Brentwood, New Hampshire, said Wednesday.

The sinking was the first of a string of calamities in 1963.

The March on Washington was a turning point in the Civil Rights movement, but the Vietnam conflict grew, white supremacists bombed the 16th Street Baptist Church in Alabama and President John F. Kennedy was assassinated.