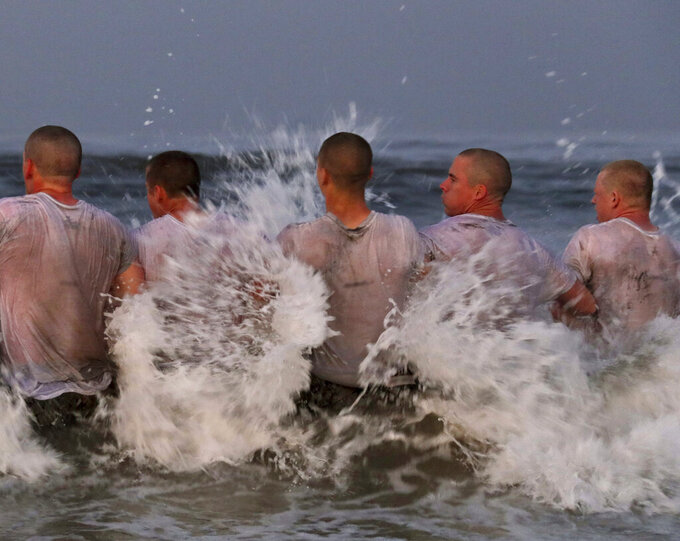 This Monday May 4, 2020, photo provided by the U.S. Navy shows SEAL candidates participating in "surf immersion" during Basic Underwater Demolition training at the Naval Special Warfare (NSW) Center in Coronado, Calif. Navy SEAL recruits and their instructors are being tested for the coronavirus as the candidates in one of the military's most grueling programs return to training with new social distancing guidelines, a top official said Tuesday, May 5, 2020. (MC1 Anthony Walker/U.S. Navy via AP) 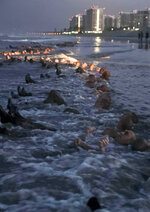 SAN DIEGO (AP) — Navy SEAL recruits and their instructors are being tested for the coronavirus as the candidates in one of the military’s most grueling programs return to training with new social distancing guidelines, a top official said Tuesday.

Everyone in the first phase of training will be tested to try to detect if anyone is infected but asymptomatic, Capt. Bart Randall said. The rapid tests to be administered this week to 170 recruits and instructors are part of a defense department pilot project.

“Ideally we'll get any asymptomatic shedders out of the population to help keep the rest of the guys safe," said Randall, the Naval Special Warfare Center’s commodore.

The recruits returned to training Monday after classes were paused March 16 as leaders established safety standards amid the pandemic.

There are noticeable differences.

Each recruit is checked daily for symptoms of the virus. Instructors are wearing masks and surgical gloves and shouting into megaphones rather than recruits’ faces. Only a limited number of SEAL trainees are allowed into classrooms at a time or during swims and runs.

No positive cases have been found so far at the training school for the SEAL recruits or candidates for special warfare boat operators, Randall said.

Anyone showing symptoms of the virus will be immediately pulled from training and evaluated by a medical team and placed into quarantine if determined to be a potential case, Randall said.

The SEAL program tests participants’ physical and psychological strength along with water competency and leadership skills.

It starts at the Naval station in Great Lakes, Illinois and typically ends 65 weeks later with graduation in Coronado, across the bay from San Diego. Each graduate is awarded the special warfare insignia known as the Trident that denotes membership in the elite fighting force: The pin features a golden eagle wrapped around a U.S. Navy anchor, while clutching a three-prong trident, and a flintlock style pistol.

The program is so grueling that 75% of candidates drop out by the end of the first month in phase one. That's when trainees undergo what is known as Hell Week when recruits are pushed to the limit with little sleep.

Medical crews will be watching closely this year to ensure any coughs or other flu-like symptoms that often are produced by the strenuous workouts are not a sign of the coronavirus, Randall said.

For most people, the coronavirus causes mild or moderate symptoms, such as fever and cough that clear up in two to three weeks. For some, especially older adults and people with existing health problems, it can cause more severe illness, including pneumonia, and death. The vast majority of people recover.

This story has been corrected to remove an inaccurate reference to the program being the first in-person evaluation.