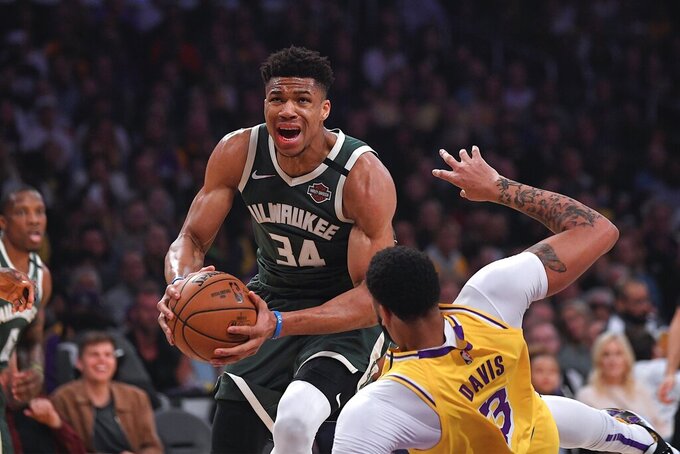 FILE - In this March 6, 2020, file photo, Milwaukee Bucks forward Giannis Antetokounmpo knocks down Los Angeles Lakers forward Anthony Davis as he drives to the basket during the first half of an NBA basketball game in Los Angeles. Jusuf Nurkic is back and healthy. So are Zach Collins, Meyers Leonard, Giannis Antetokounmpo, Anthony Davis and plenty of others. If the four-month NBA shutdown had a silver lining, it’s that a lot of ailing players got well. (AP Photo/Mark J. Terrill, File)

The Milwaukee Bucks believe they can build on the momentum they established while putting up the NBA’s best record before the pandemic-imposed hiatus — even if it has been months since they played a meaningful game.

Milwaukee is 53-12 and virtually assured of entering the postseason as the Eastern Conference’s top seed. The Bucks return from a 4 ½-month layoff July 31 when they face the Boston Celtics in Florida.

“I feel like we’re in a really, really good place right now as a team,” reigning MVP Giannis Antetokounmpo said. “Our chemistry’s in a good place. Everybody’s having fun. Everybody’s smiling. Can we be better? Obviously we can be better. I feel like day by day, game by game, this team will get better.”

The Bucks acknowledge they must shake off some rust, but it turns out they weren’t quite as limited during the shutdown as they may have led people to believe.

Antetokounmpo said in April that he didn’t have access to a hoop while under quarantine. He now says he was just kidding when he made that comment.

“Anybody out there that thinks I didn’t have access to a gym, they don’t really know me,” Antetokounmpo said. “I just said that to try to get a little bit ahead of the competition.’’

The Bucks left for Florida at less than full strength as starting point guard Eric Bledsoe and reserve guard Pat Connaughton tested positive for the coronavirus. Coach Mike Budenholzer has been cautiously optimistic that both will be ready when games begin, and the Bucks tweeted out a video Wednesday night indicating Bledsoe had arrived.

If the Bucks stay healthy, they have all the pieces to contend for their first NBA title since 1971. They’ve built a deep roster around Antetokounmpo and have been playing elite defense all season.

The Bucks were on a three-game skid when the NBA halted play, marking the first time all season they lost consecutive games. Antetokounmpo missed two of those games with a sprained left knee but says he is healthy now.

The biggest questions surround the availability of Bledsoe and Connaughton. Bledsoe is averaging 15.4 points, 5.4 assists and 4.6 rebounds. Connaughton provides quality 3-point shooting and athleticism off the bench.

Antetokounmpo won’t get a chance to strengthen his case for a second straight MVP during eight seeding games. The NBA says seeding games shouldn’t be taken into consideration for any individual awards.

“Certainly Giannis in our minds has done more than enough to deserve back-to-back MVP,” Budenholzer said. “What he does for us on both ends of the court, what he does every night, the way he sets the bar for us culture-wise, work ethic-wise, just as a teammate, he’s an incredible teammate, plays unselfishly, does everything. I think that’s kind of what the MVP is.”

The NBA bubble has been a sort of homecoming for Bucks centers and Disney enthusiasts Brook and Robin Lopez. Brook Lopez has used his Walt Disney World expertise to make restaurant recommendations for Budenholzer.

“It’s a huge responsibility, but I looked at it like going out to make Bud proud when I’m on the court,” Lopez said. “I tried to do the same thing with this list. It was a little tough for me to keep it curated and tight enough for him.”

If the Bucks have the NBA’s top seed in the playoffs, it won’t mean home-court advantage. The Bucks instead will have to maintain playoff focus while playing in front of no fans.

“We grew up playing in empty gyms, especially in the summertime,” Middleton said, “We work out in empty gyms. I don’t think it will be tough to do, but it will be different.”