NC governor's race sets pace for Democrats in the South 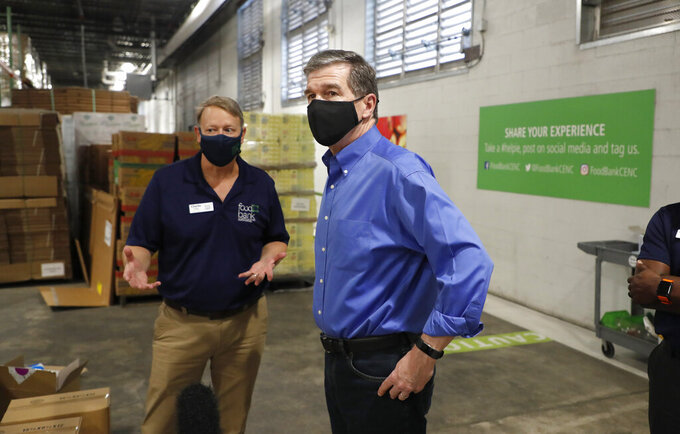 FILE - North Carolina Gov. Roy Cooper talks with Charlie Hale, vice president of Operations & Programs of the Food Bank of Central & Eastern North Carolina, during the governor's tour of the Raleigh, N.C., branch of the food bank, Thursday, Aug. 27, 2020. Four years after he narrowly won the politically divided state carried by then-candidate Donald Trump, Cooper now has a double-digit lead over his Republican challenger, Lt. Gov. Dan Forest. Cooper's reelection path offers clues to what will work for Southern Democrats in an election cycle that also will determine control of the White House and Congress. (Ethan Hyman/The News & Observer via AP, File)

RALEIGH, N.C. (AP) — Joe Biden may have one of his best chances for a Southern victory in North Carolina, where he stands to benefit from a mild-mannered Democratic governor praised for his balanced approach to controlling the coronavirus.

Four years after he narrowly won the politically divided state carried by then-candidate Donald Trump, Gov. Roy Cooper has a double-digit lead over his Republican challenger, Lt. Gov. Dan Forest, in a July poll. Cooper's reelection path offers clues to what will work for Southern Democrats in an election cycle that also will determine control of the White House and Congress.

On the surface, the strategies used in the Cooper-Forest contest — one of the few closely watched 2020 gubernatorial races — appear to mirror those of Biden and President Trump.

While other Southern governors followed Trump's lead, shunning mask mandates, Cooper ordered that face coverings be worn in public — but he put the onus on businesses to enforce it and refrained from ticketing individual offenders.

He also took a balanced approach to shutdowns, closing bars and gyms while allowing all businesses in which customers could social distance to open at a reduced capacity. Unlike other Democratic governors, he placed few restrictions on construction and supported in-person school instruction.

Halbert Carmichael, 82, partly credits Cooper for the fact that his Raleigh retirement community, with about 150 residents, has only had a few positive cases. Nursing homes and residential care facilities account for half of the state’s coronavirus deaths.

“I feel like Governor Cooper’s done a fairly good job, and I have absolutely no faith in the Republicans,” Carmichael said.

Still, some want Cooper to go further in enforcing public health directives. While law enforcement agencies have been reluctant to punish businesses and individuals defying public health orders, the governor said in an interview that a lot of enforcement actions happen outside of public view, and “enforcement is going as well as it can.”

Cooper's handling of the coronavirus could be behind his lead over Forest in the polls, said Michael Bitzer, a political science professor at Catawba College.

“We can see other governors of both parties who have been much more responsive and proactive have higher job approval ratings, and I think that’s probably the deciding factor that puts Cooper at such an advantage at this point,” Bitzer said.

A NBC News/Marist poll of 882 registered North Carolina voters conducted between July 14 and July 22 found Cooper leading Forest by 20 percentage points. The poll, which used live interviewers to call people on landline and mobile numbers, reported a margin of error of plus or minus 4 percentage points.

Cooper has tried to strike a balance in areas outside the pandemic: Early in his four-year term, he launched an unsuccessful bid in court to expand Medicaid — an issue dear to Democrats — but he also agreed to only a partial repeal of the state’s “bathroom bill,” which required students to use restrooms corresponding to their biological sex. That compromise appeased Republicans who supported the bill. In June, amid nationwide protests against racial injustice, the governor removed Confederate statues from the old Capitol grounds and formed a task force against racism.

Forest, meanwhile, has garnered attention with an unsuccessful lawsuit challenging Cooper's authority to issue COVID-19-related executive orders without approval from a 10-member state body. Forest withdrew the challenge this month after a judge rejected his demand to block Cooper from shuttering businesses.

Mirroring the dynamic of other races during the pandemic, Cooper, the Democrat, has decided to remain off the physical campaign trail, while Forest, the Republican, routinely holds large gatherings where masks are not worn and social distancing is not practiced.

Despite his concerns for public safety, Cooper said he had no plans to stymie Forest’s campaign activities.

“You’d have the same people who would complain if we had law enforcement go in and arrest people that we were violating their First Amendment rights,” Cooper said.

Forest, who declined an interview request, likes to remind folks that Cooper had a mask dangling from his ear when he walked among racial justice advocates outside the governor’s mansion.

Forest’s candidacy centers on a push to reopen the state. In a statement, he said he’d provide more information through the state’s online COVID dashboard, which he says he’d use to “replace the current culture of fear with clear goals and a path forward.”

“As governor, I will not pick winners and losers in the economy with poll-driven restrictions,” Forest said.

Charles Parker, a 49-year-old carpenter in Raleigh, said he voted for Democratic presidential nominee Hillary Clinton in 2016 after anti-Trump pressure from peers. Though he only knows Forest because of the lawsuit, Parker plans to support him and other top Republicans.

“I’m most interested in seeing law and order restored and an end to the corruption,” Parker said.

But Forest is at a distinct disadvantage. In addition to being the lesser known candidate, he faces an onslaught of attack ads from Cooper and is far behind in fundraising. His campaign entered July with less than $2 million in cash, compared to Cooper's $14 million.

Still, Republican groups haven't given up on Forest.

“We don’t comment on strategy, but I can tell you that we view this race as an exciting opportunity to pick up a seat,” Republican Governors Association spokeswoman Amelia Chassé Alcivar said in a statement.