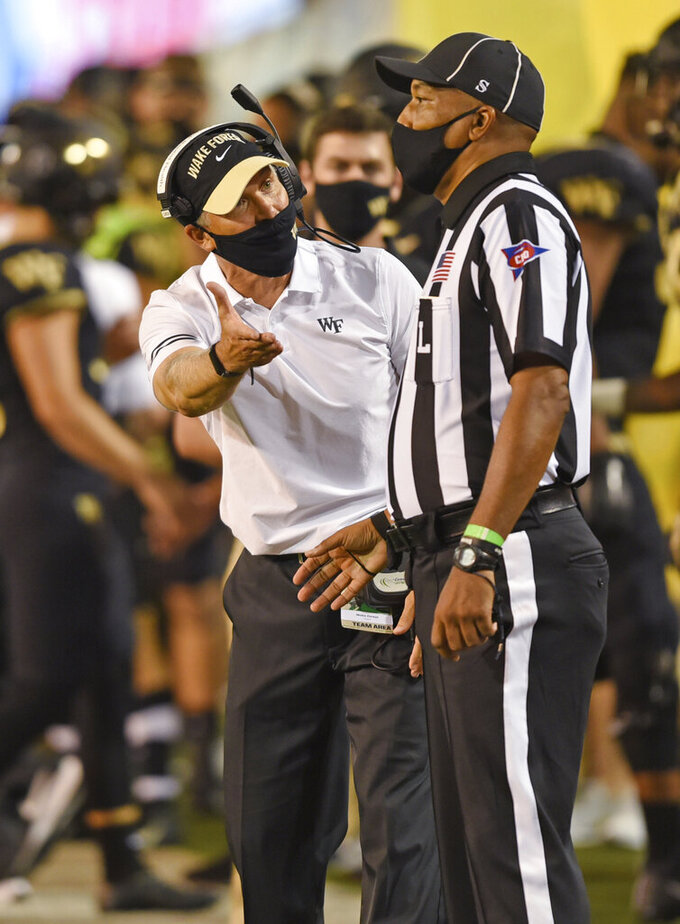 Wake Forest coach Dave Clawson complains that there was no pass interference call in the second half against Clemson during an NCAA college football game Saturday, Sept. 12, 2020, in Winston-Salem, N.C. (Walt Unks/The Winston-Salem Journal via AP)

“I think we’re starving for a routine,” Doeren said. “And so this allows us hopefully to have one, just to get into gameweek and know that we have an opportunity to back-to-back similar weeks as we move forward. Because we’ve had the opposite. Every day has really been a day where change could happen.”

N.C. State had to pause all sports activities Aug. 24 due to a cluster tied to athletics, with the football program not returning to practice for a week. By then, N.C. State had postponed the scheduled opener at Virginia Tech for two weeks to Sept. 26.

That turned Saturday’s visit from the Demon Deacons (0-1, 0-1 ACC) into the new opening game in a long-running series that has been played every year dating to 1910. It’ll be the first chance for the Wolfpack to show improvement from a four-win season after being picked to finish 11th in the 15-team league race.

For Wake Forest, the goal will be to move forward after a 37-13 loss to top-ranked Clemson and go for a fourth straight win in the series.

“We did some things in that game (against Clemson) that wouldn’t allow us to beat anybody we play,” Wake Forest coach Dave Clawson said. “And as a coach, my focus is in fixing those problems. So when we play N.C. State, if we’re going to lose, let’s have N.C. State beat us, let’s not have Wake Forest beat Wake Forest.”

Some other things to know about Saturday’s Wake Forest-N.C. State game:

Preseason All-ACC kicker Nick Sciba had a bumpy start to the season for the Demon Deacons by making 2 of 4 field goals against Clemson after missing just one all last season. That comes with the Demon Deacons having a new snapper and holder.

“He’s just got to learn to trust the new operation,” Clawson said.

This will be the first look at the Wolfpack’s new offense under coach Tim Beck, who had plenty of obstacles installing a new scheme as Devin Leary begins a second year as starting quarterback. That’s because the Wolfpack got in just five spring practices before the coronavirus pandemic shut down college and professional sports, followed by the interrupted preseason camp.

“We did have some setbacks obviously with the virus, but I feel like our players have been pretty resilient,” Beck said.

Wake Forest has won the past three meetings, two coming on dramatic finishes. Wake Forest won 30-24 in 2017 when Wolfpack receiver Emeka Emezie lost a fumble at the goalline with 1:51 left. Two years ago Wake Forest ended a five-game skid in Raleigh by scoring the winning touchdown with 30 seconds left.