An NCAA hockey tourney first: All 5 Minnesota teams are in 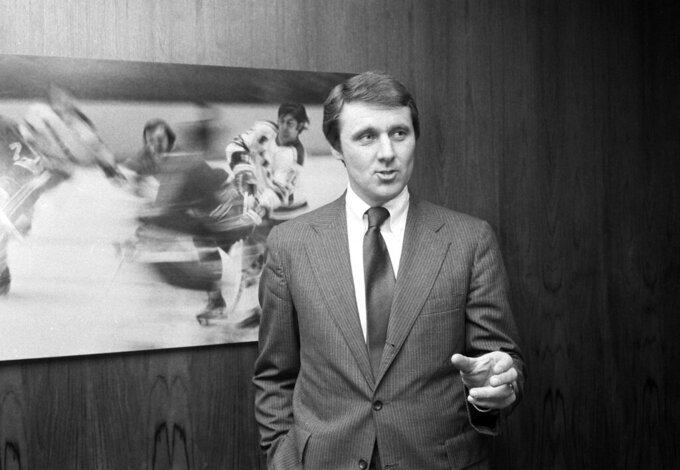 FILE - In this Wednesday, Feb. 6, 1980 file photo, Herb Brooks, coach of the 1980 U.S. Olympic Hockey team, stands in front of a hockey photo at the Hall of Fame Club at Madison Square Garden in New York. The NCAA men's hockey tournament bracket this year would have made Herb Brooks proud. For the first time, all five Division I programs from Minnesota made the 16-team field. Minnesota is the No. 3 overall seed. The Gophers are joined by Minnesota State, Minnesota Duluth, St. Cloud State and Bemidji State. Brooks was a player and coach for Minnesota who went on to Olympic and NHL fame. He also helped launch St. Cloud State's leap to Division I in 1987. Brooks spoke often of his desire to grow the college game in his home state. (AP Photo/Ron Frehm, File)

MINNEAPOLIS (AP) — For all Herb Brooks accomplished in the world of hockey, the Hall of Fame coach of the heralded “Miracle on Ice” team long held a localized goal of growing the college game in his home state.

The NCAA Tournament bracket this year would've made Brooks proud. For the first time, all five of Minnesota's Division I programs made the 16-team field. The regionals start on Friday.

“I think that's a really cool story," said Minnesota coach Bob Motzko, whose team won the Big Ten Tournament and has the No. 3 overall seed.

The men's college hockey tournament was first staged in 1948. The NCAA's current 16-team format came in 2003.

“Nobody’s slipped in. I can tell you that. All five teams have earned the right to be there, and any of the five have a chance,” said Motzko, who's in his third season at Minnesota.

Motzko's first year in coaching was as an assistant at St. Cloud State under Brooks, who helped launch the program's leap to Division I in 1987. Brooks, the former Gophers player and coach who went on to fame at the Olympic and NHL levels until his death in a car crash in 2003, spoke often of his desire for in-state competition for Minnesota and Minnesota Duluth. Minnesota State moved up in 1996, and Bemidji State followed in 1999.

St. Thomas will become the state's sixth and the NCAA's 62nd Division I program next season, joining Minnesota State and Bemidji State in the new Central Collegiate Hockey Association.

“Very happy for the group, because I consider every one of those head coaches a very good friend of mine,” Minnesota State coach Mike Hastings said. “I wish them all the best, and hopefully we can all go and represent the state of Minnesota the way we want to.”

With so few schools offering the sport and largely confined to certain areas of the country, college hockey is a tight-knit community. There's no stronger evidence of that than with the five Minnesota teams. Each head coach was born and raised in the state: Motzko (Austin), Hastings (Crookston), Minnesota Duluth's Scott Sandelin (Hibbing), St. Cloud State's Brett Larson (Duluth) and Bemidji State's Tom Serratore (Coleraine). Motzko, Hastings, Larson and Serratore all spent time as a player or an assistant at at least one other of the Minnesota teams.

Motzko's last trip to the NCAA Tournament was in 2018 with St. Cloud State, when the No. 1 overall seed was upset by Air Force. Now he's guiding the Gophers to their NCAA-record 38th appearance, a mark matched by Michigan.

“It is the craziest tournament,” Motzko said. “Anybody can win, and that’s one of the things that’s changed in the last decade in college hockey. The dividing line now isn’t what it was in the ’70s and even in the ’80s. It is a deeper pool.”

Such evolution has allowed programs like Minnesota State, which was ranked sixth in the latest USA Today/USA Hockey Magazine poll, to become more competitive. No team has won more games than the Mavericks (234) over the nine seasons since Hastings became their coach. This will be their seventh appearance in the NCAA Tournament, though they've yet to win a game there.

Just making it this year was an accomplishment amid the COVID-19 protocols that led to several postponements and constant anxiety.

“You were worrying about stringing together weekends, let alone a second half, and knock on wood the guys did a great job up until this point at minding their 'P's and ‘Q’s away from the rink and making sure that their bubble is very tight,” said Hastings, whose Mavericks were sent to Loveland, Colorado, to play Quinnipiac on Saturday.

Minnesota faces Omaha in the other semifinal, with two wins needed to reach the Frozen Four in Pittsburgh on April 8.

St. Cloud State plays Boston University on Saturday in Albany, New York. The winner will play No. 2 overall seed Boston College, which advanced because Notre Dame was forced to withdraw because of coronavirus issues in the program.