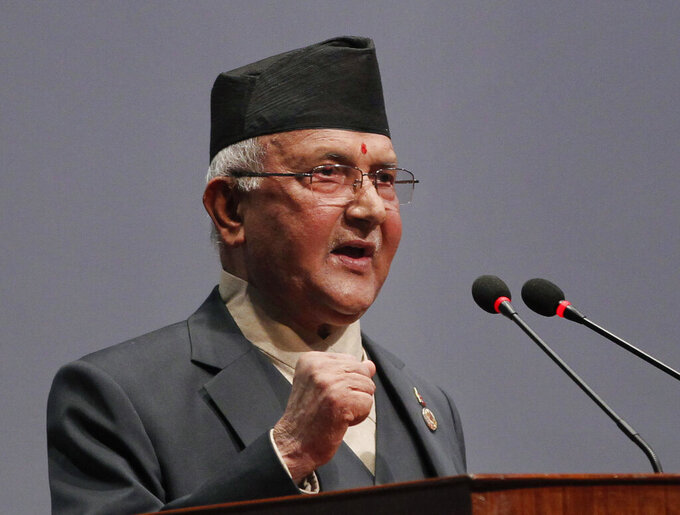 FILE- In this Oct. 11, 2015 file photo, Nepal's Khadga Prasad Oli addresses parliament before being appointed as the new Prime Minister in Kathmandu, Nepal. Nepal’s supreme court on Tuesday, Feb. 23, 2021, ordered reinstating parliament that was dissolved by Prime Minister Oli that is likely to push the Himalayan nation to a political crisis. (AP Photo/Niranjan Shrestha, File)

KATHMANDU, Nepal (AP) — Nepal’s Supreme Court on Tuesday ordered the reinstatement of Parliament after it was dissolved by the prime minister, in a ruling likely to thrust the Himalayan nation into a political crisis.

The order came in response to several cases filed with the court charging that Prime Minister Khadga Prasad Oli's decision to dissolve the legislature was unconstitutional. The court said a meeting of the reinstated Parliament must be called within 13 days.

The order will cause political trouble for Oli since he will not have a majority of votes in a reinstated Parliament.

Since Parliament's dissolution in December, there have been regular street protests against Oli by tens of thousands of people in Kathmandu and other cities.

Oli decided to dissolve Parliament and hold new elections because of an escalating feud within his governing Nepal Communist Party.

He became prime minister after the party won elections three years ago. Oli’s party and the party of former Maoist rebels had merged to form a strong Communist party to win the elections.

However, there has been a power struggle between Oli and the leader of the former Maoists rebels, Pushpa Kamal Dahal, who is also co-chair of the party. The two had previously agreed that they would split the five-year prime minister’s term between them, but Oli has refused to allow Dahal to take over.

A splinter group led by Dahal is organizing the street protests and his supporters are among those who filed cases with the Supreme Court.

Other opposition parties have repeatedly accused Oli’s government of corruption, and his administration has faced criticism over its handling of the coronavirus.

Oli also has been accused of moving closer to China and drifting away from Nepal’s traditional partner, India, since taking power. This has caused problems between India and Nepal.