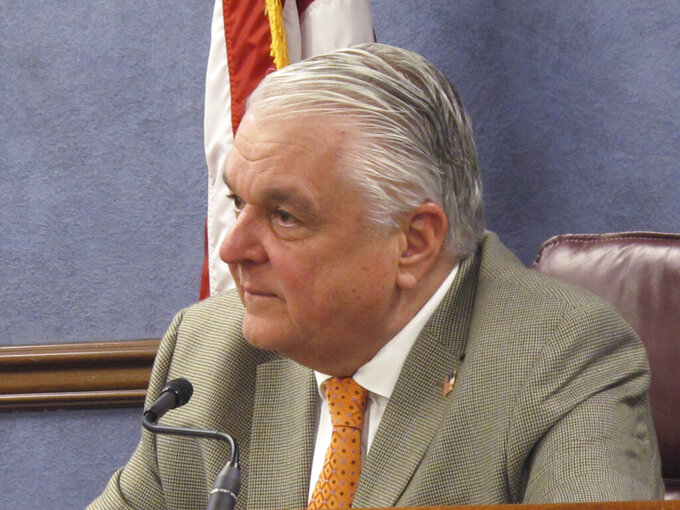 Nevada Gov. Steve Sisolak listens to a reporter's question during a news conference in Carson City, Nev., Thursday, May 7, 2020, after Sisolak announced that Nevada will begin allowing restaurants, salons and other non-essential businesses to reopen starting Saturday. It's the first easing of restrictions imposed in Nevada seven weeks ago to stop the spread of the coronavirus. Casinos are among businesses that will remain closed for now. (AP Photo/Scott Sonner)

LAS VEGAS (AP) — Nevada gambling officials approved rules Thursday to limit customers, keep gamblers spaced apart from each other and disinfect dice and cards when the state’s casinos are allowed to reopen.

The commission did not act on a request from the casino employees’ Culinary Union to incorporate the workers’ suggested health guidelines, including testing staff for COVID-19 and screening people with temperature checks upon entry.

The union also called for the commission to publicly release all reopening plans submitted by casinos. The operator of the Wynn and Encore casinos already took that step voluntarily.

“We have to reassure guests that we are ready for them, that they will be safe when they come back. If we don’t get it right when we reopen, the long-term consequences for our industry will be devastating,” the union’s leader, Geoconda Argüello-Kline, said in comments submitted to the commission.

Several other public comments raised concerns that with the stress of the virus, the risk of gambling addiction was high and others suggested using the reopening to limit or ban smoking, noting that protective face masks would have to be lowered if people are allowed to continue lighting up in casinos.

Gov. Steve Sisolak has not yet announced when casinos can reopen. He took the unprecedented step of shuttering casinos and all gambling, including slot machines in convenience stores, in mid-March, as part of a broader shutdown of nonessential business.

The Democratic governor on Thursday is expected to announce the date of the first phase of Nevada’s gradual reopening. He said last week that casinos would not be open “at the beginning” of the first phase and did not make it clear if they could be open before the end of May.

Some Las Vegas Strip resorts have said they’re aiming to be open by Memorial Day, if allowed by the state.

Under the guidelines approved Thursday, casinos will be limited to 50% of the occupancy allowed in buildings, and conventions will be limited to 250 people. Restaurants will have limited seating, swimming pool cabanas and lounge chairs “must allow for appropriate distancing” and the usually tightly packed nightclubs and dayclubs will stay closed for now.

Seating at table games should be limited to three players for blackjack, six for craps, four for roulette and four for poker.

Chairs should be removed from every second slot machine in order to keep safe distances between gamblers. Casino managers and supervisors must work to keep customers from gathering in groups around tables.

At least seven days before opening, casinos will need to create and enact plans detailing how they will sanitize everything, from chairs to slot machines, and regularly clean and disinfect dice, cards, roulette wheels and other gambling equipment.