Nevada to get more ventilators as virus spreads, need grows 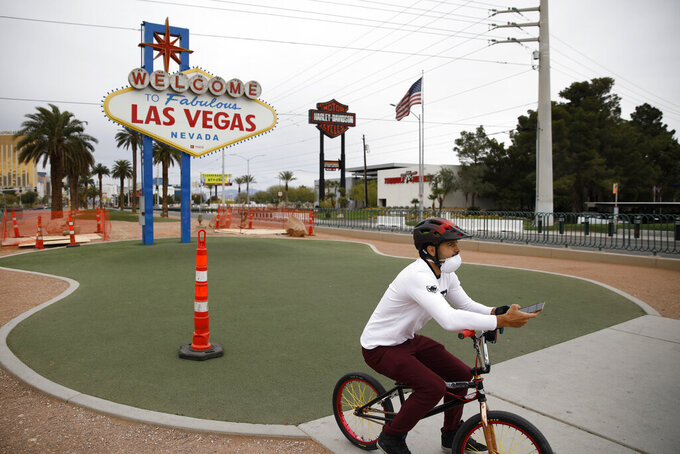 A man wearing a mask amid the coronavirus outbreak rides a bike near the "Welcome to Fabulous Las Vegas Nevada" sign along the Las Vegas Strip, Monday, April 6, 2020, in Las Vegas. (AP Photo/John Locher)

RENO, Nev. (AP) — As Nevada's coronavirus cases have grown, the number of the state's ventilators in use has climbed slightly, with just under half of the machines in use, Gov. Steve Sisolak said Monday,

Sisolak said with patients using 44% of the state's 838 ventilators, Nevada is seeking 450 more from the U.S. government to prepare for what's expected to be a growing number of cases and hospitalized patients in the coming days and weeks.

The governor made his comments less than an hour after the White House announced Nevada would receive 100 ventilators on loan from California.

Sisolak said he had not heard that news, but had been on an hours-long phone call earlier Monday trying to secure the machines for the state. He said the U.S. Federal Emergency Management Agency told him to expect delivery of the 450 ventilators he requested “72 hours before what they're deeming a surge” in cases in Nevada, whenever that day comes.

The Democratic governor said the state is working with FEMA to monitor the virus in the state and be ready for a surge of demand for the machines, which help struggling patients breathe.

But Sisolak also said he isn't going to predict when the worst of the virus will hit the state. The governor said he's seen several statistical models trying to predict the curve of cases in Nevada, showing a peak occurring anywhere between the end of this week and sometime in June.

“The statistics are going to bear out as they are and I'm not going to get into the forecasting business of when we'll hit our peak day or when we'll be finally through a plateau. I'm just focused on every day, doing everything we can to keep Nevadans as safe as we can," he said.

Sisolak, who entered his Monday evening news conference wearing a face mask that he removed before speaking, urged all Nevadans to stay home, saying it's the most effective tool to stop the spread of COVID-19.

Earlier Monday, two northern Nevada tribes became the first governmental entities in the state to order mandatory curfews punishable by fines and potential jail time for repeat offenders in response to the spread of the coronavirus.

The Reno-Sparks Indian Colony curfew requires members stay in their homes from 9 p.m. to 5 a.m. through April 30 unless they are working in essential businesses, obtaining emergency medical treatment or making essential trips.

Essential trips include travel to and from grocery stores, obtaining medical care, caring for another individual and obtaining essential supplies to maintain a residence.

"It is now against the law to have unnecessary gatherings," Tribal Chairman Arlan Melendez wrote in an April 3 directive to it's more than 1,500 members living on about 23 square miles (60 square kilometers) within the Reno-Sparks metro area.

Penalties range from a $500 civil fine for first time offenses to up to a misdemeanor criminal charge and 180 days in jail for third-time offenders.

The Pyramid Lake Paiute Tribe's curfew runs indefinitely from 10 p.m. to 5 a.m. on its reservation covering more than 700 square miles (1,800 square kilometers) about 40 miles (64 kilometers) northeast of Reno with similar exceptions for emergencies and use of essential services. Violators are subject to a $100 fine.

Nevada has reported 46 deaths and more than 1,900 positive tests for COVID-19.

Most people with the virus experience mild or moderate fever and coughing for two to three weeks. Some, especially older adults and people with existing health problems, can face severe illness including pneumonia and death.

In other developments Monday:

— The economic shutdown was blamed for the elimination of former Las Vegas Mayor Oscar Goodman’s job as regional tourism ambassador. The husband of current Mayor Carolyn Goodman said Monday he was idled in mid-March as chairman of the Las Vegas Convention and Visitors Authority’s Host Committee Advisory Council after casinos closed and conferences canceled.

— Las Vegas police said they are stepping up patrols to deter illegal target shooting, off-road vehicle use, camping and dumping amid a stay-at-home order. Police said the U.S. Bureau of Land Management has reported a spike in illegal activity.