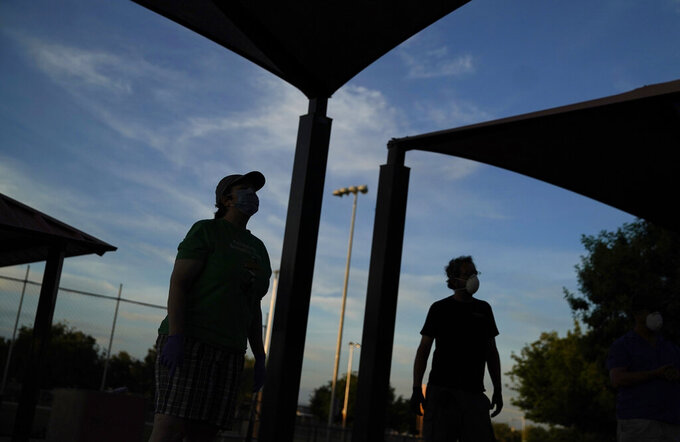 In this Wednesday, May 6, 2020, photo Ginger Bruner, left, plays bocce ball will friends at a park in Las Vegas. Bruner is a musician and hasn't worked since the coronavirus shutdown. (AP Photo/John Locher)

LAS VEGAS (AP) — Andrea Bensmiller and three bandmates were onstage at the Planet Hollywood resort on the Las Vegas Strip, performing for conventioneers during a big mid-March construction trade show when word came that she and thousands of other musicians, acrobats and entertainers were out of work.

The next day, March 15, “It rippled through everybody finding out that day that everything had been taken down," said Bensmiller, a professional musician, singer and teacher. “All those gigs wiped out overnight.”

Two days later, Nevada Gov. Steve Sisolak ordered casinos and many businesses in the state closed to prevent crowds from gathering and spreading the coronavirus.

The historic skid to a stop halted a state on an economic hot streak. Unemployment was a lowest-ever 3.6% in February while casinos reported three straight months of $1 billion in winnings.

On Friday, the state unemployment rate hit a record 22%. Nationally, the unemployment rate shot to 14.7% in April. That's the highest since the Great Depression. About 20.5 million jobs vanished during the month, the U.S. Labor Department reported.

In Nevada, the state Department of Employment, Training and Rehabilitation has received more than 440,000 initial claims for jobless benefits this calendar year. That’s close to one in three of the entire statewide workforce of 1.4 million people in February.

Casino giant MGM Resorts International and Caesars Entertainment each furloughed more than 60,000 employees. Hospitality, food service, retail, real estate and construction were the hardest hit, said the Center for Business and Economic Research at the University of Nevada, Las Vegas. The Nevada Resort Association commissioned a report that said 320,000 employees relying on $1.3 billion a month in wages and salaries were at immediate risk.

The week ending March 21, nearly 93,000 people filed for state unemployment benefits, overwhelming a state jobless office that had been handling an average of about 2,400 new applications a week. Many complained they couldn’t get through. Sisolak and officials rushed to upgrade technology and add staff.

“They have yet to process my claim, and I have been patiently waiting since March 27,” Katherine Jones, a married mother with a 7-year-old son and a 1-year-old daughter, said this week.

Jones worked for the Internal Revenue Service for 11 years in Atlanta and Las Vegas. She described calling time after time and even using automatic telephone redial applications.

“The way the citizens are being treated is unacceptable,” she said. “Nobody could have been fully prepared for this catastrophic disaster, (but) something needs to be done. People’s lives are in jeopardy.”

Jason Smulo, a casino restaurant manager, considers himself lucky to be getting state unemployment benefits plus $600 a week in coronavirus federal relief. But he’s not sure when he’ll be back to work and worries about friends missing rent and mortgage payments while using accrued vacation time and hoping for back payments of delayed benefits.

“One buddy of mine didn’t get his unemployment payments for five or six weeks, and he had lots of bills,” Smulo said. “It was really tight for him.”

When Sisolak issued his unprecedented closure order, Las Vegas — home to 2.3 million people and host to 42.5 million tourists in 2019 — had one death and the state had fewer than 100 confirmed cases of COVID-19.

Seven weeks later, state health officials are reporting almost 300 deaths and 5,900 cases statewide. Almost 4,600 of those cases and at least 245 deaths have been in the Las Vegas area.

For Ginger Bruner, part of the all-female Celtic band Killian’s Angels, the shutdown canceled key St. Patrick’s Day bookings. She worried that gigs might return too late for some arts, music and restaurant workers, and that cutting capacity to keep patrons apart at venues will slow a recovery.

“Getting our jobs back depends heavily on a lot of things,” Bruner said, “including whether they are going to be able to sell tickets, whether people can mingle. Las Vegas is completely dependent on people coming here. We have to make it fun for people. But how do you have fun when you can’t be near anybody and you have to wear a mask?”

Bensmiller started an internet fundraiser to help musicians in need, but she said some have already left town or taken supermarket jobs.

“For everybody who’s in entertainment here, whether they’re getting back to normal this year or it drags into next year, it’s a huge unknown,” she said.

Joel Perlman, a self-employed construction contractor and property buyer, was among hundreds of motorists receiving provisions at a drive-thru food bank in the parking lot of a shuttered casino near his home in suburban Henderson.

Perlman, 62, said being idled was hard. But he worried the virus might spread if Las Vegas reopens too soon.

“If they open this town up prematurely? All these people coming here and they get infected? They take it back to their families? Before you know, it its worse than it was in the beginning,” he said. “Then we’d really be shut down.”