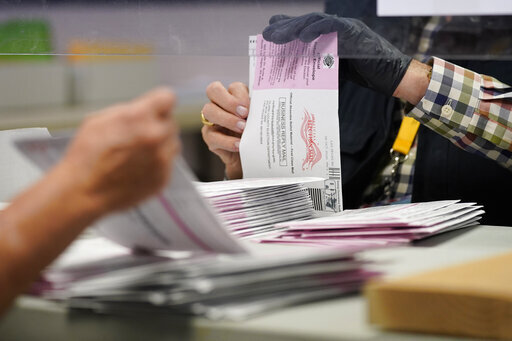 FILE - In this a Clark County election department facility Oct. 31, 2020, file photo, County employees process mail-in ballots in Las Vegas. Nevada lawmakers are considering sending mail-in ballots to all active voters in future elections after passing a law last summer that directed election officials to do so to prevent the coronavirus from spreading at polling places. A legislative committee is scheduled on Thursday, April 1, 2021, to hear a proposal to make the policy permanent. (AP Photo/John Locher, File)

Assembly Speaker Jason Frierson presented a bill in a committee hearing on Thursday that would direct election officials to send all active voters mail-in ballots in each election, arguing that making voting more convenient and accessible strengthens democracy.

"This is not Costco. Voting is a right, not a privilege. We should make it as convenient and equitable for eligible Nevadans as possible," the Las Vegas Democrat said.

"I’ve had countless constituents that have reached out to me since the election expressing their distrust and uneasiness with the process of the 2020 election. In fact, many have said that they’re not going to vote again,” Assemblywoman Jill Dickman, R-Sparks, said.

Frierson said he believed concerns about election integrity were valid and noted that he incorporated proposals from Dickman and others to improve Nevada’s voter roll maintenance and signature verification procedures. If passed, the bill will require vote counters complete a forensic signature verification course, and direct the secretary of state to compare its list of registered voters to Nevada’s Registrar of Vital Statistics on a monthly basis to purge dead people from voter rolls.

Lawmakers did not vote on the proposal, but the overtures did not appear to sway Republicans on the committee, who asked why it was necessary to change current laws that allow for no-excuse absentee voting.

Nevada was one of four states that decided to mail all active voters ballots amid the pandemic and the decision provoked partisan rancor and contempt from former President Donald Trump in the months that followed.

Vote by-mail was the most popular form of voting, ahead of early in-person and Election Day voting. Total turnout was 0.6% higher than it was in 2016 and 3.5% lower than in 2012.

In the lead-up to the election, Republicans drew attention to voter roll maintenance and ballots sent to addresses where people no longer lived. Afterward, they challenged whether election officials could verify signatures on ballots to a sufficient extent.

Numerous lawsuits and reviews of complaints conducted by the Nevada Secretary of State's Office have not yielded evidence of systemic election fraud or widespread manipulation of mail-in ballots.

Other states that moved to mail all active voters ballots amid the pandemic, including California, are also considering adopting the policy permanently.

Lawmakers in Republican-led state legislatures are considering reforming state election policies to address concerns about security and the distrust in current procedures that was fomented throughout the 2020 election cycle. In states ranging from Georgia to Arizona, those policies include tightening voter ID requirements and mandating more frequent purges to maintain accurate voter rolls.