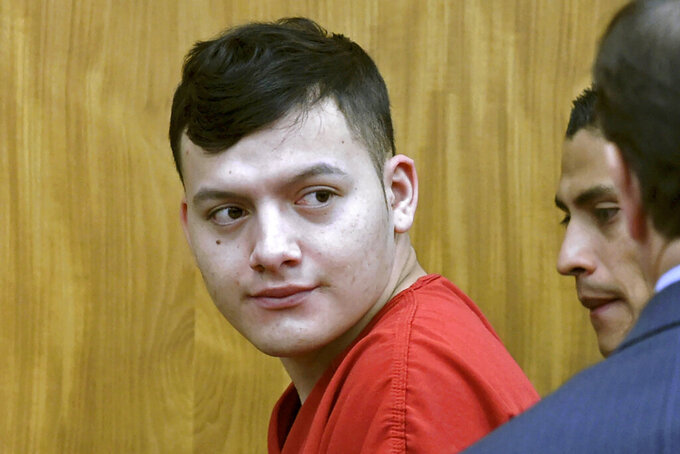 RENO, Nev. (AP) — Lawyers for a 22-year-old Salvadoran immigrant accused of killing four people in two counties in 2019 urged Nevada’s Supreme Court Wednesday to overturn for a second time a Washoe County judge’s ruling that he can be tried for all the crimes in district court in Reno.

Prosecutors countered that Washoe County has the authority to conduct a single trial primarily because Wilber Ernesto Martinez-Guzman fatally shot all four victims with the same gun he stole from a Reno couple before committing the Douglas County homicides.

The high court rejected the prosecution’s argument last March, sided in part with the defense and ordered Washoe District Judge Connie Steinheimer to revisit the matter. But she ruled again in September that prosecutors had sufficiently connected the crimes to try him in one location.

Martinez-Guzman's lawyers appealed again last fall, and both sides went before the justices Wednesday via video hookup to make their oral arguments.

“Mr. Guzman simply did not engage in acts in Washoe County that were directed to have an effect or to reach the consummation of a criminal offense in Douglas County,” he said.

Deputy District Attorney Marilee Cate argued Steinheimer’s ruling was based on reasonable inferences that Martinez-Guzman formed the intent to commit the Douglas County crimes while in Washoe County.

Martinez-Guzman faces the possibility of the death penalty if convicted of the killing of an elderly Reno couple and two Gardnerville women in their homes during what authorities say was a 11-day rampage fueled by his drug addiction in January 2019.

Martinez-Guzman had worked as a landscaper for all four of the victims.

Police say he stole the revolver from Gerald and Sharon David in Reno Jan. 4, 2019. They say he fatally shot Constance Koontz on Jan. 9, killed Sophia Renken on Jan. 12 and robbed and killed the Davids on Jan. 15.

Cate said Wednesday that before he obtained the gun, he had been burglarizing outbuildings where he wouldn’t encounter people but once he had the gun he felt “more empowered” and began to enter residences where he ultimately committed the murders.

“Guzman’s intent was to gain money for drugs. And he went to these homes with that intent and escalated his plan when he obtained the gun in Washoe County,” she said.

“There is no continuing offense in this case,” he said. “There is no evidence the intent was formed in Washoe County. The intent could have been formed instantaneously at the time of the shooting.”

Still pending before the state Supreme Court is a defense motion asking the justices to intervene to make clear how long public defenders should have to try to prove Martinez-Guzman is intellectually disabled and therefore can’t be executed if convicted of the murders.

The trial currently is scheduled to begin Sept. 20 in Washoe District Court in Reno.

Steinheimer has set an April 20 deadline for his lawyers to file an intellectual disability motion that would require hearings to determine if Martinez-Guzman could legally be put to death in Nevada.

His public defenders say they have been unable to gather necessary evidence in his native El Salvador largely because of COVID-19 travel restrictions.

They say state law allows such motions to be filed up to 10 days before trial. They have asked the Supreme Court to stay all district court proceedings until justices rule on their objection to what they say is a premature deadline set five months before the scheduled trial.

Prosecutors say it’s a stall tactic that further delays justice for the victims and families at a trial that has already been postponed twice while witnesses’ memories continue to fade.