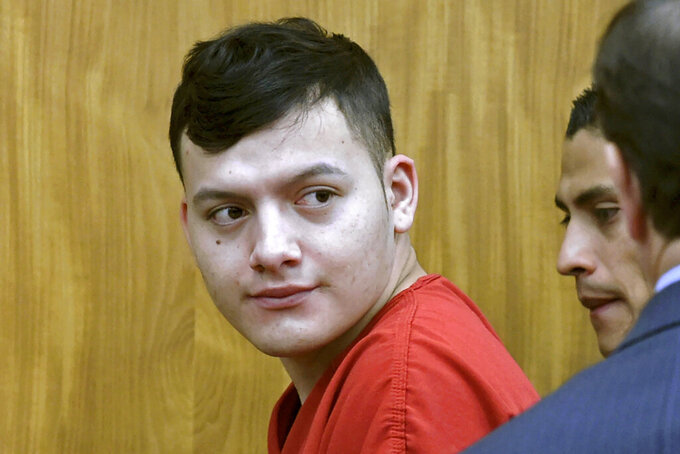 FILE - In this May 20, 2019, file photo, Wilber Ernesto Martinez-Guzman, from El Salvador, appears in Washoe District Court in Reno, Nev. Nevada’s Supreme Court wants to hear directly from lawyers on both sides in a death penalty dispute over how much more time public defenders should have to try to prove the Salvadoran immigrant is intellectually disabled and can't be executed if convicted of four 2019 Nevada killings. The justices have scheduled oral arguments April 7, 2021, on one of two appeals filed by lawyers representing Martinez-Guzman, 22. (Andy Barron/The Reno Gazette-Journal via AP, Pool, File)

RENO, Nev. (AP) — Nevada’s Supreme Court wants to hear directly from lawyers on both sides in a death penalty dispute over how much more time public defenders should have to try to prove a Salvadoran immigrant is intellectually disabled and can't be executed if convicted of four 2019 Nevada killings.

The justices have scheduled oral arguments April 7 on one of two appeals filed by lawyers representing Wilber Ernesto Martinez-Guzman, 22.

Public defenders say a Washoe County judge has illegally set a premature April 20 deadline to file a motion to declare him intellectually disabled — five months before the trial is scheduled to begin Sept. 20.

The high court also is considering whether Washoe and Douglas counties' district attorneys can prosecute him in court in Reno for all four of the January 2019 homicides. His lawyers say the Washoe County grand jury that indicted him has no jurisdiction over two Douglas County killings.

Prosecutors disagree. They argue the crimes are linked, partly because the same gun was used in all four killings during an 11-day crime rampage.

Deputy Defender John Reese Petty said in their most recent Supreme Court filings the motion hasn't been filed yet because they’ve been unable to gather necessary evidence in Guzman’s native El Salvador due largely to COVID-19 travel restrictions.

The defense says Steinheimer's deadline violates Nevada law, which gives defendants facing the death penalty up to 10 days prior to trial to file the motion.

“This court must allow him the opportunity to investigate, collect, analyze and marshal the best and most reliable evidence on his intellectual disability,” Petty wrote.

But the defenders say the vast majority of information concerning Martinez-Guzman’s formative years is in El Salvador, where he was born before coming to the United States at age 17. Federal officials have said he’s is in the U.S. illegally, but they don’t know how or when he arrived.

Much of the dispute centers on Steinheimer’s insistence Martinez-Guzman’s legal team doesn’t necessarily need to travel to El Salvador. She has said that face-to-face interviews are preferable, but there’s “no legal requirement that the interviews and assessments of informants be in person.”

She has pointed to “technological advances ... being utilized around the world’’ and suggests alternatives such as video hookups.

The defense argues that while such alternatives are used for gathering rudimentary information, they’re unacceptable in a capital case.

“The stakes are high,” said Dr. Antonio Puentes, a bilingual neuropsychologist who testified for the defense at a hearing last July. He said if “you want the real deal that stands up to science and stands up to any kind of legal challenge, then it is all face-to-face.”

Prosecutors haven’t responded since the Supreme Court set oral arguments. But they wrote in related filings opposing a stay in proceedings in district court — until after the high court rules — that Martinez-Guzman’s lawyers have made a “tactical decision” to wait until closer to the trial to file the disability motion because it will trigger an automatic stay.

They argue Nevada law specifies only that such motions cannot occur less than 10 days before the trial date and doesn’t address whether a judge can set a deadline further out.

“The matter has been continued due to circumstances beyond the direct control of all involved,” District Attorneys Chris Hicks of Washoe and Mark Jackson of Douglas wrote Monday.

While the delay benefits Martinez-Guzman by allowing more time to further investigate his disability motion, they said, “the effects of time wear on the recollection, health and availability of the witnesses that the state would use to support its case.”