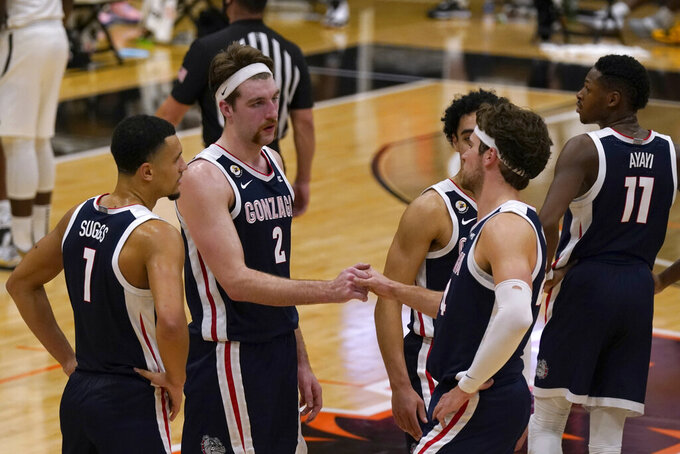 A new group of teams has inched closer to basketball royalty and has remained relatively steady even as the coronavirus pandemic has wreaked havoc on the sport.

Top-ranked Gonzaga, No. 5 Villanova and a handful of other programs may not have the historical resumes to compare to the bluebloods, but consistent success over the past decade — in some cases, more — puts them in a new category of dominating teams.

“What's happened is, you have emerging new bloods,” ESPN college basketball analyst and former coach Seth Greenberg said. “It's kind of semantics, kind of word play, but what they are is model programs for winning in the culture of college basketball today.”

Any list of college basketball bluebloods starts with Kentucky, Duke, North Carolina and Kansas. UCLA, the all-time leader with 11 national championships, and Indiana usually get the nod, too, though deep March runs have evaded them in recent years.

Michigan State has pushed toward blueblood status under coach Tom Izzo, winning a national championship in 2000 and reaching the Final Four eight times.

The new bloods have the recent consistency, just not over the long haul like the bluebloods.

Virginia won the 2019 national championship, has reached the NCAA Tournament seven of the past eight seasons and has six combined ACC regular-season and tournament titles since 2014.

Baylor is undefeated this season and has reached the Sweet 16 four times under coach Scott Drew.

UConn won two national titles in a decade but has not been to the NCAA Tournament since 2016. Louisville appears to be on the rise after a couple of down years.

Villanova and Gonzaga have been the new blood flag bearers.

The Wildcats have won three national championships, including two in a three-year span under coach Jay Wright. Villanova reached the NCAA Tournament in 14 of the past 15 years — excluding the pandemic-halted 2020 season — and in 2019 became the first team to win three consecutive Big East titles.

Gonzaga played in the 2017 national championship game, has nine Sweet 16 appearances and played in the NCAA Tournament every year there's been one in 21 seasons under coach Mark Few. The Zags have won or shared 11 straight West Coast Conference regular-season titles, eclipsed 20 wins in 24 consecutive years and have dominated through an undefeated 2020-21 season.

“Those two find players who fit their programs,” Greenberg said. “There's a standard to play there and neither of them has compromised their standards.”

The standards have allowed Villanova and Gonzaga to retain their consistency even when many of the traditional bluebloods are struggling through a pandemic-altered season.

Kentucky is 6-13 after beating Auburn on Saturday and is danger of missing the NCAA Tournament for the first time since 2013. Kansas already has seven losses and recently had its record streak in the AP Top 25 end at 231 weeks.

Gonzaga and Villanova have had little trouble navigating the stops and starts of a pandemic season.

The Zags have plowed through one of the nation's toughest schedules, beating Kansas, West Virginia, Iowa and Virginia — all ranked at the time — while turning their conference games into laughers.

The Wildcats stumbled in a 16-point loss to No. 19 Creighton on Saturday but are 11-3 and atop the Big East standings at 8-2.

The advantage for those two programs this season — and beyond — has been continuity.

The traditional bluebloods often rely on production from star freshmen and the truncated lead-up to this season cost them precious development time.

Villanova and Gonzaga typically have players who stick around for two or more seasons, so there's almost always a core of returning players who know the system and the expectations. The lack of practice time before the season due to the pandemic had an impact on both teams, like it did every program, but the ramp-up had less complications because key players returned.

“Those coaches are great at developing young players through the summer and the fall,” Wright said. "Us, Gonzaga and Baylor have been fortunate this year that we have a lot of veteran players.”

It's kept the new bloods moving forward while the bluebloods have been sinking during the pandemic.