For new generation of Olympians, path was through NCAA beach 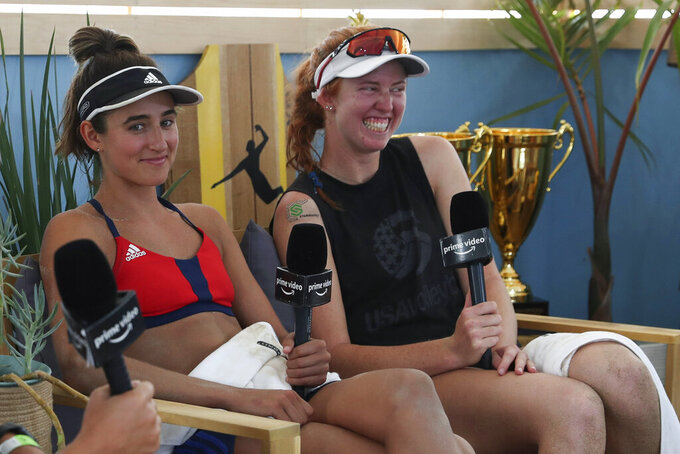 This 2020, photo provided by the Association of Volleyball Professionals shows Sarah Sponcil, left, and Kelly Claes during an interview at the AVP Champions Cup in Long Beach, Calif. The Americans are part of the first generation of college beach volleyball players to reach the Olympics. At 24 and 25, they are the youngest U.S. beach team ever to qualify for the Summer Games. (Mpu Dinani/AVP via AP) 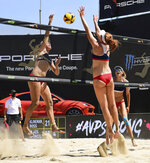 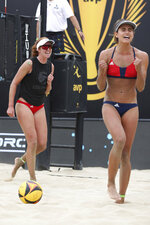 April Ross was 24 years old when she first started playing beach volleyball, the sport that would eventually send her to four Olympics.

At that age, Sarah Sponcil is already headed to the Summer Games.

Sponcil and her 25-year-old partner, Kelly Claes, are the first generation to come up through an NCAA beach volleyball program that didn’t exist until 2012 — long after Ross graduated from Southern California. They are the youngest U.S. beach team ever to qualify for the Olympics.

“This kind of shows what having college beach volleyball can do,” Claes said in a recent interview as she prepared for the Tokyo Olympics. “There’s just so many more opportunities for women to play. I think it’s incredible, and I think the sport is only going to get better and better in the States.”

And just in time.

One of two traditional powers in beach volleyball, joining with Brazil to win 20 of the first 30 medals after the sport joined the Olympic program in 1996, the United States has been losing ground of late. Europeans claimed four of the six men’s podium spots in London and Rio de Janeiro; Germans Laura Ludwig and Kira Walkenhorst won gold in 2016.

Where the U.S. has been competitive, it is skewing old: Ross, now 39, and Kerri Walsh Jennings, now 42, were the only U.S. team to medal in Rio — the Americans' worst haul since 2000. Tokyo will be the fourth Summer Games for both Jake Gibb, who at 45 is the oldest Olympic volleyball player (beach or indoor) ever, and Phil Dalhausser, who is 41.

Walsh Jennings, who won three gold medals with Misty May-Treanor, will miss the Olympics for the first time since 1996 after being edged out by Claes and Sponcil in the second-to-last week of qualifying. (Ross is teamed with 31-year-old Alix Klineman.)

“For a long time, the U.S. was Kerri and Misty. All the other countries caught up and passed us,” Claes said. “This is the U.S.’s big push to get back on top, and I think it’s our time to lead the charge in this new era.”

Invented in the Roaring ’20s at a Parisian nudist colony and popularized on coastlines from California to Copacabana, beach volleyball first joined the Olympic program in Atlanta. Early stars like Karch Kiraly and Walsh Jennings tended to be transplants from the indoor game.

That changed in 2012, when the NCAA added beach volleyball as an “emerging sport for women,” encouraging schools to field varsity teams; three years later, it was granted full championship status. There are now 64 Division I teams recognized by the NCAA, many of them in traditional spots like California and Florida but others spread along the Gulf Coast and some in landlocked volleyball hotbeds like Nebraska.

With college as an option — and, as importantly, receiving a scholarship to play — athletes are no longer just migrating to the beach after their indoor careers are over.

“You can just see their style of play is a lot different than some of us who have been around for a lot longer,” Ross said. “They’ve really pushed the sport to a higher level and it’s just going to keep becoming tougher and tougher to play.”

Claes, who grew up playing beach volleyball, won back-to-back NCAA titles at USC. Sponcil began indoors at Loyola Marymount before transferring to the beach team at UCLA, where she also earned two titles.

Tina Graudiņa, who was a member of the Trojans’ 2021 championship team, will compete in Tokyo for Latvia.

“We all saw it coming,” said Dain Blanton, who won the beach gold medal in Sydney and now coaches the USC team. “When this movement took place, 2012, to get collegiate beach volleyball started on the women’s side, you just knew it was going to be this grassroots movement to produce all this talent.”

Blanton, who grew up less than 2 miles from the Pacific Ocean in Laguna Beach, California, knew the beach was in his future. But indoor was his only opportunity for a college scholarship; he was an All-American at Pepperdine, where he led the Waves to the 1992 NCAA title. (There is still no NCAA beach volleyball program for men.)

Although the sports overlap on equipment and some rules, the six-person indoor version relies more on power and leaping than the two-person beach game. Starting earlier on the sand, Blanton said, has given players like Claes and Sponcil a head start on the techniques and strategy specific to their discipline.

They also have earlier access to coaching and training they need.

“A lot of beach players, you roll the balls out and do your thing. Whereas now, in college, you have this basis of training — you learn how to practice, travel,” he said. “It translates, and you can learn the game quickly.”

For Claes and Sponcil, that meant hitting the Olympic qualifying tour with experience from already playing in big tournaments in their teens and 20s. Sponcil said she watched a recent NCAA beach championship and “it was amazing to see how the sport has grown.”

“There’s so many great athletes coming out of college these days,” she said.

And she is among them.

“It’s crazy, because we just have so many years in front of us," she said. "To be so young, we’re going to have so much experience under our belts. And it’s going to help us down the road.”