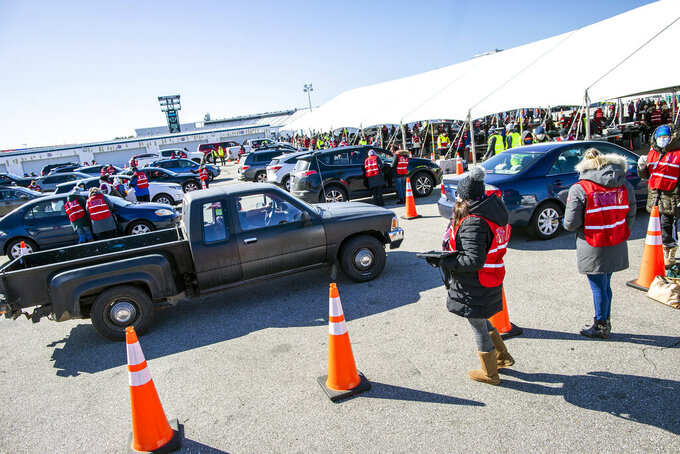 Vehicles line up as people get registered for the Johnson and Johnson one-dose vaccine at the New Hampshire Motor Speedway in Loudon, N.H., Saturday morning, March 6, 2021. The state hopes to have 12,000 people vaccinated at the speedway by Monday afternoon. (Geoff Forester/The Concord Monitor via AP)

LOUDON, N.H. (AP) — New Hampshire Gov. Chris Sununu on Saturday toured a mass vaccination site at the New Hampshire Motor Speedway in Loudon as the state kicked off a three-day vaccination push with the goal of giving Johnson & Johnson shots to about 12,000 people.

Sununu said the state was able to move up to this weekend vaccines for individuals, most of whom were originally scheduled to receive their shots in April.

“The opportunity to vaccinate nearly 12,000 Granite Staters at one site over the course of a single weekend is an incredible opportunity for New Hampshire,” the Republican said.

The move was made possible by the delivery of Johnson & Johnson vaccine shots.

Those scheduled to receive a shot drove up to the area where the shots were being administered and then drove on to an observation area where they were monitored for a brief period of time before being allowed to leave.

The J&J vaccine is a single dose vaccine, meaning there’s no need for a second shot.

The total number of confirmed coronavirus deaths in Massachusetts has topped 16,000.

There were fewer than 700 people reported hospitalized Saturday because of confirmed cases of COVID-19.

The latest numbers come as Massachusetts is easing COVID-19 restrictions on visitors from more states.

Travelers from Missouri, Oregon and Washington won’t need to quarantine when they arrive in Massachusetts beginning Saturday, according to the state’s website explaining pandemic travel restrictions.

The states join Hawaii and Puerto Rico, which are also deemed lower risk.

The announcement comes as Maine Governor Janet Mills announced Friday that those traveling to the state from Massachusetts, Connecticut, and Rhode Island can visit without quarantining or producing a negative COVID-19 test.

Visitors from other states must quarantine from the date of their arrival in Massachusetts unless they meet one of the state's criteria which include producing a negative COVID-19 test result administered up to 72 hours before their arrival.

Teachers and regulated child care program staff will get information from their employers about how to register for vaccines and when and how they will get the shots, the Vermont Department of Health said Friday.

The vaccine appointments will take place over the next few weeks, the department said. Teachers and child care staff should not make appointments until they hear from their employers, officials said.

Anyone with questions is asked to contact their school COVID-19 coordinator.

Coronavirus infections among Connecticut students in pre-kindergarten through Grade 12 have dropped and leveled off after infection rates spiked to their highest levels of the school year in January.

There were 467 new student infections from Feb. 25 to March 3, or 49 fewer than the previous week, according to the Department of Public Health. For the week that ended Jan. 13, there were more than 1,600 new infections.

School staff infections also have declined substantially since mid-January, but increased last week when 151 staff tested positive, up 18 from the previous week. There were 521 new staff infections during the week that ended Jan. 13.

Only a small percentage of the more than 500,000 students and 50,000 educators in the state have contracted the virus.

Both President Joe Biden and Gov. Ned Lamont have been pushing for schools to be open for in-person learning during the pandemic.

Maine reported 183 new cases of COVID-19 on Saturday, according to the Maine Center for Disease Control,

The 183 new cases bring the total number of cases since the pandemic began in Maine to more than 45,600.

No new fatalities were reported on Saturday. The death toll in the state remains at 704.

U.S. Sen. Jack Reed is hailing a $25 billion plan aimed at providing additional help to struggling restaurants that was included in a $1.9 trillion virus relief bill approved Saturday by the U.S. Senate.

The grants provide up to $10 million per company with a limit of $5 million per physical location. The grants can be used to cover payroll, rent, utilities and other operational expenses.

Under the proposal, bars, restaurants and caterers showing significant financial losses due to the pandemic could apply for grants to cover eligible expenses, such as payroll support, benefits, rent, utilities, building maintenance and construction of outdoor facilities.

“Restaurants add so much to our communities and culture. They are economic force multipliers, bringing people, jobs, and opportunities to the places they serve,” said the Rhode Island Democrat, who pushed for the measure. “They are worth fighting for.”