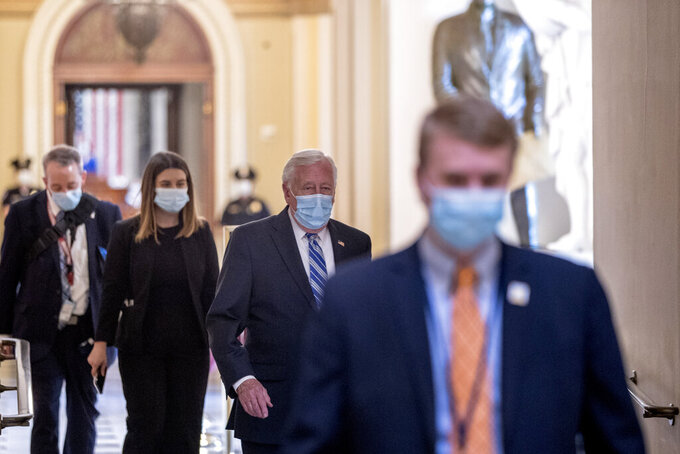 House Majority Leader Steny Hoyer of Md., second from right, walks off of the House floor on Capitol Hill, Thursday, April 23, 2020, in Washington. The House is expected to vote on a nearly $500 billion Coronavirus relief bill. (AP Photo/Andrew Harnik)

WASHINGTON (AP) — The House voted Thursday to create a new subcommittee that will track more than $2 trillion in coronavirus aid, adding another layer of oversight as President Donald Trump's administration carries out the largest economic rescue in U.S. history.

House Speaker Nancy Pelosi says the new House Oversight and Reform subcommittee is necessary to root out fraud and abuse and to examine the government’s overall response. It will supplement the work of other watchdogs tasked with tracking the dollars, including a committee of inspectors general, a congressional panel of experts and a special Treasury Department official.

The new 12-member panel, with a 7-5 Democratic majority, will also have the power to subpoena Trump administration officials and conduct depositions.

Republicans spoke out against it ahead of the vote, saying it duplicates the work of other committees and will be politicized by Democrats. The vote followed strict party lines, 212-182, with no Republicans supporting it.

Oklahoma Rep. Tom Cole, the top Republican on the House Rules Committee, said the panel will “simply turn into yet another partisan witch hunt aimed at damaging the president.” Rep. Jody Hice, R-Ga., said Democrats are creating the panel “because they hate the president of the United States.” And Rep. Drew Ferguson, R-Ga., compared it to previous investigations into Russian election interference and last year’s impeachment proceedings and said Democrats were “like a bird dog pointing to a quail. You can't help yourselves.''

House Rules Committee Chairman Jim McGovern, D-Mass., said the committee needs to be formed because the president is already undercutting oversight of the economic rescue law. Trump has said his administration will not comply with some of independent oversight requests, and he ousted the official who had been appointed to lead the committee of inspectors general, called the Pandemic Response Accountability Committee.

“When it comes to $2 trillion, I don’t think there can be enough oversight,” McGovern said. “I think our constituents expect us to make sure that that money is being spent, where it should be spent, where Congress intended it.”

Pelosi said she modeled the panel on a committee led by then-Sen. Harry Truman to look at defense spending during World War II. She has already appointed South Carolina Rep. James Clyburn, the No. 3 House Democrat, as its chairman.

The committee’s oversight will go beyond just tracking the dollars. The members will be tasked with reviewing the government’s preparedness, including implementation of testing and stockpiling of protective equipment; the effects of the coronavirus on minority populations and whether any government whistleblowers are protected. It is also being asked to review executive branch “policies, deliberations, decisions, activities, and internal and external communications" related to the coronavirus pandemic.

Pelosi said the committee will ensure “the federal response is based on the best possible science and guided by health experts, and that the money invested is not being exploited by profiteers and price gougers."

Creation of the subcommittee came amid criticism of a Democratic appointee to a separate oversight panel. Rep. Donna Shalala of Florida, Pelosi's choice for a new Congressional Oversight Commission, failed to disclose stock sales she made in 2019 following her 2018 election to Congress. Shalala told the Miami Herald she sold the stocks to eliminate potential conflicts of interest, but by failing to disclose the sales, she may have violated a law meant to combat insider trading by members of Congress.

“I absolutely missed those deadlines, and I apologize for them,'' Shalala said Wednesday. ”It was my mistake, and I take full responsibility.”

Shalala, a former health and human services secretary in the Clinton administration, is serving her first term in Congress.