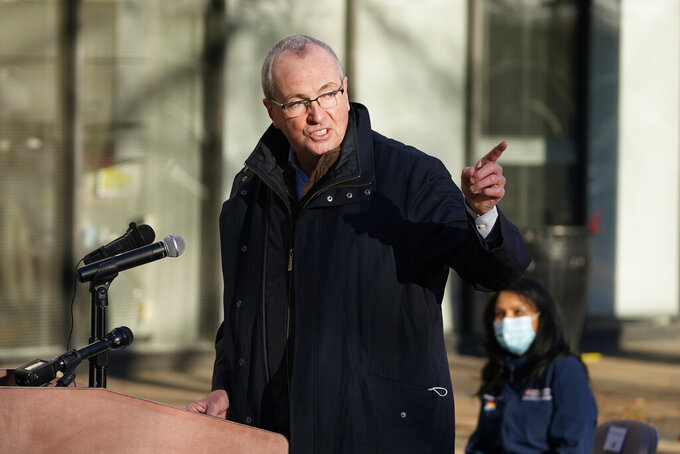 NEWARK, N.J. (AP) — Maritza Beniquez has had a front-row seat to the devastation the coronavirus pandemic has wrought on communities of color in New Jersey, so she jumped at the chance to take the vaccine that is being hailed as a turning point in a long and grueling battle against the deadly virus.

The 56-year-old emergency room nurse at Newark's University Hospital became the first in New Jersey to receive the COVID-19 vaccine on Tuesday.

Beniquez said she “barely felt” the needle go in and had experienced no side effects. All vaccine recipients will get a second shot a few weeks after the first.

Gov. Phil Murphy and other officials were on hand at the hospital's vaccine center at Rutgers New Jersey Medical Center, where health care workers will be given the vaccine produced by Pfizer. The center is expected to be able to vaccinate about 600 people per day.

Essex County, which includes Newark, has had more than 2,000 deaths from COVID-19, the most of New Jersey's 21 counties. Last month the test positivity rate soared to around 40% in some areas including the Ironbound, the heart of the city’s Spanish and Portuguese community, prompting Mayor Ras Baraka to impose a curfew and additional restrictions on businesses.

New Jersey is expected to get three shipments of the Pfizer vaccine this month, beginning with about 76,000 doses this week and another 86,000 next week. The Pfizer vaccine requires ultra-cold storage and will be administered only at hospitals for now.

The U.S. Food and Drug Administration will consider Moderna’s vaccine for approval later this week and, if approved, New Jersey will also be receiving doses of that vaccine.

Five other acute care hospitals in New Jersey were to begin administering the Pfizer vaccine Tuesday, and 47 additional hospitals were expected to be added by the end of the week, Health Commissioner Judy Persichilli said.

If the Moderna vaccine is approved, the state will receive about 150,000 next week, she said. The vaccines will be available later this month at local health departments, county sites, urgent care clinics, and pharmacies.

Health care workers with direct or indirect exposure to COVID-19 patients are first in line for the vaccine, along with long-term care residents and staff. Murphy estimated it will be April or May before the general public will be able to get the vaccine.

He cautioned that several difficult months lie ahead as the state continues to struggle to control the virus.

"We've got to stay the course," he said. “We're not flipping a switch today.”

New Jersey suffered thousands of deaths in the early months of the pandemic and was among the first states to impose stringent restrictions on businesses and social gatherings. The state has had nearly 16,000 confirmed deaths from COVID-19, the fifth-most in the country, according to the Johns Hopkins University Medicine Coronavirus Research Center.

The virus receded during the early part of the summer but has surged in recent weeks. Murphy noted Monday that more than 700 patients with COVID-19 were in intensive care units in hospitals across the state, the most recorded since late May.