New Jersey Devils practice for the first time since Jan. 31 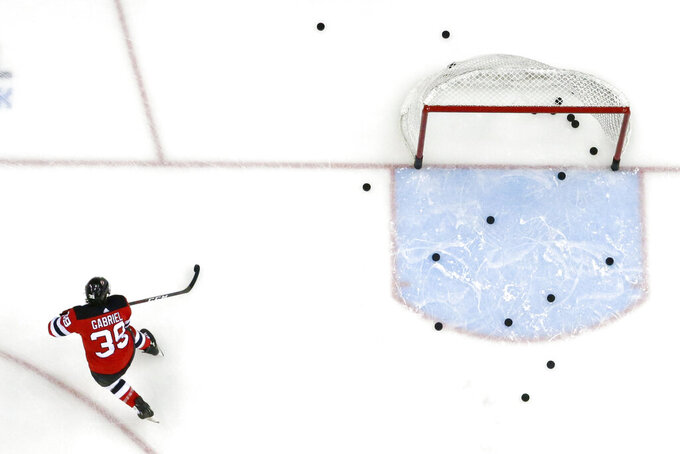 FILE - In this Feb. 17, 2019, file photo, New Jersey Devils right wing Kurtis Gabriel works out prior to an NHL hockey game against the Buffalo Sabres in Newark, N.J. The Devils are back at work after a COVID-19 wildfire landed 19 players on the NHL’s isolation list and forced the postponed of seven games since the end of January. The Devils practiced Monday, Feb. 15, 2021, for the first time since beating the Sabres in Buffalo on Jan. 31. (AP Photo/Julio Cortez, File)

The New Jersey Devils are back at work after 19 players landed on the NHL's COVID-19 list and forced the postponement of seven games since the end of January.

The Devils, who play the Rangers on Tuesday, practiced Monday for the first time since beating the Sabres in Buffalo on Jan. 31.

Over the next three days after that game, 11 players were added to the NHL's list of players unavailable because of COVID-19, pushing the Devils' total to 17. The list reached 19 on Feb. 9.

The number of Devils on the list on Monday was reduced to four: veteran forward Travis Zajac, forward Nikita Gusev, center Nico Hischier, who has yet to play this season, and defenseman Dmitry Kulikov. It was the fewest for the team since Jan. 30.

“It’s kind of unfortunate and it’s kind of crazy how fast it spreads,” forward Miles Wood said Monday. “I think that’s the scariest part. You know, it took down a team within a matter of three days, so it’s very serious. ”

Goaltender Mackenzie Blackwood was the first to test positive on Jan. 20. Zajac, who is two games shy of his 1,000th regular-season game with New Jersey, was sidelined before the Jan. 29 game in Buffalo. Kyle Palmieri got his positive test on the morning of the 31st and then things mushroomed after the team arrived in Pittsburgh for a game on Feb. 2. The NHL shut down the Devils, forcing the team to send players home in two groups, those in the isolation group and those healthy.

Wood didn't test positive. He had COVID-19 before training camp opened this year, so a lot of players asked him what to expect. He said he had a head cold. However, he knew of others who had high fevers.

Palmieri, who practiced Monday, said he felt nothing for couple of days after his positive result. Two or three days after the result, the symptoms developed and lasted until the end of the week. His sense of smell is just returning.

Zajac, who went into the protocol a few days before Palmieri, remains in it.

Blackwood said he had a bad cough and a hard time breathing. He is just rounding back into shape, and said he's ready for the Rangers in New York if called upon since the team has been off for two weeks. He also said seeing the team come down with COVID-19 was “crazy.”

“I didn’t expect that to happen, but my thoughts were just: ‘I hope this isn’t because of me,’” Blackwood said.

Palmieri doesn't believe the Devils did anything wrong to cause the spike. He said players have been wearing their masks, eating meals in their hotel rooms and holding each other accountable.

“We’re spending an hour or two hours, however, over the course of a game next to each other on a bench breathing heavily and and I mean, playing hockey is a tough sport,” he said. “You’re coming back and you’re pretty gassed and you’re trying to catch your breath. So that’s a lot of close contact, heavy breathing. You read enough about this virus, that’s probably one of the worst things you can do is long extended times of heavy breathing among people without masks.”

Palmieri admits there has been some anxiety the past two weeks. Players have been concerned about keeping their families healthy and possible long-term effects of having had COVID-19.

“You think about every scenario going through your head and what could happen,” Palmieri said. “But hopefully, as we all start to come back, everyone returns to full health. And like I said, we get back to playing hockey and doing the thing we love.”

Devils coach Lindy Ruff has told his team to treat the past two weeks like a reset. He felt the team was playing well before the break. He wants his players to focus on defense and taking short shifts on Tuesday. Special teams were covered on Monday along with getting the players to skate and improve their stamina.

“I don’t think any coach has really dealt with anything like this and, you know, to have that number of players go out and now have to have a reset,” said Ruff, who has spent nearly two decades as an NHL head coach. “I think you can find lots of excuses, you know, that you could lose a game. I want to find reasons we can win.”

Wood said playing the Rangers will help. It's a rivalry game and he said there is no reason the Devils won't be up for it.

“We have a lot of young guys on the team and, to be honest, I don’t think it’s going to affect us that much,” Wood said. “I think the adrenaline will take over and we’ll be right back to game shape.”