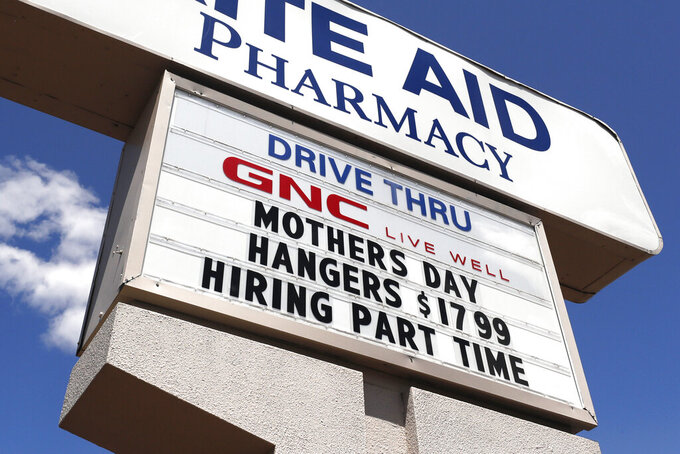 A hiring part time sign is posted outside the Rite Aid Pharmacy in Derry, N.H., Thursday, May 7, 2020. Roughly 33.5 million people have now filed for jobless aid in the seven weeks since the coronavirus began forcing millions of companies to close their doors and slash their workforces. (AP Photo/Charles Krupa)

Here are the latest coronavirus-related developments in New Hampshire:

The head of one of New Hampshire’s largest theaters urged state officials Thursday to quickly lay out a timetable for lifting the ban on large gatherings so the performing arts industry can plan for reopening.

Nicolette Clarke, executive director of the Capitol Center for the Arts in Concord, spoke to the Governor’s Economic Reopening Task Force on behalf of the state’s historic presenting theaters, which attract national touring shows. Nearly all of the smaller producing theaters — those that mount their own shows — have canceled their summer seasons, and the presenting theaters are anxious to avoid the same fate, she said.

“We are living in limbo and it is exceedingly frustrating and costly. We need some markers and a timeline,” she said. “We understand that conditions with the virus may change the pace of reopening, but having no information and guidance at this point is untenable.”

Nearly 12,000 initial unemployment claims were filed in New Hampshire last week, down more than 3,000 from the previous week, the U.S. Department of Labor reported Thursday.

The latest number covers new claims through May 2.

The number of new claims in a week peaked at 39,000 in early April and has since been declining.

As of Thursday, 2,843 people in New Hampshire had tested positive for the virus, an increase of 104 from the previous day. There have been at least 114 coronavirus-related deaths in the state.

A New Hampshire company is getting a $1.9 million loan from the U.S. Department of Agriculture to improve broadband service in rural communities.

The money comes from the department's ReConnect Program and will go to Granite State Communications for service investments benefiting the towns of Hillsborough, Deering and Washington.

“The need for rural broadband has never been more apparent than it is now — as our nation manages the coronavirus national emergency. Access to telehealth services, remote learning for school children, and remote business operations all require access to broadband,” said U.S. Secretary of Agriculture Sonny Perdue.

Perdue made the announcement in an online press conference along with state officials and the members of the state's congressional delegation.

Members of the Executive Council are protesting Gov. Chris Sununu’s authority to spend state money to combat the coronavirus.

The council voted 4-1 Wednesday to table what usually is a routine request from the state treasurer to spend money for all functions of state government for the next month. The request included $500 million in state funding and $450 million from the federal coronavirus relief aid package.

Councilor Andru Volinsky, a Democratic candidate for governor, objected, saying the council and the public deserve more details, including information about which health care providers applied for no-interest loans from a $50 million fund.

Republican Councilor Russell Prescott joined Volinsky and the other two Democrats in voting to table the request. Sununu said he assumes the council will approve the request May 20, otherwise all of state government would shut down.