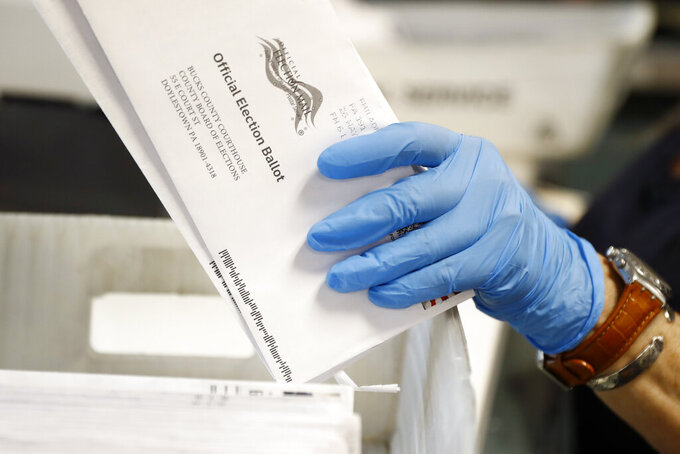 FILE - In this May 27, 2020 file photo, a worker processes mail-in ballots at the Bucks County Board of Elections office prior to the primary election in Doylestown, Pa. The Supreme Court’s action in a Pennsylvania voting case has heightened fears among Democrats about Amy Coney Barrett joining the high court in time to decide a post-election dispute and with it, the winner of the White House. (AP Photo/Matt Slocum, File)

HARRISBURG, Pa. (AP) — A lawsuit filed Thursday is challenging Pennsylvania's court-ordered deadline to count mail-in ballots that are received as many as three days after the Nov. 3 election in the presidential battleground state.

Plaintiffs — including four registered voters from Somerset County and a Republican congressional candidate — are asking a federal judge in Pittsburgh to block the deadline extension from going into effect.

It names Gov. Tom Wolf’s top election official, Kathy Boockvar, a Democrat who has argued in the state's courts that a deadline extension was necessary to prevent late-arriving mail-in votes from being thrown out because of postal delays.

It comes 12 days before the election and three days after the U.S. Supreme Court, divided 4-4, rejected a Republican plea making a slightly different argument than Thursday’s lawsuit.

Both sought to block a state Supreme Court ruling that required county election officials to receive and count mailed-in ballots that arrive up until Nov. 6, even if they don’t have a clear postmark, as long as there is no proof it was mailed after the polls closed.

Thursday’s lawsuit said that the court’s deadline extension and the lack of a postmark requirement “will allow for late and otherwise unlawful ballots to be counted.”

That is unconstitutionally unfair to in-person voters and exceeded the court’s authority by exercising a power that is constitutionally vested in Congress and the Legislature, the lawsuit said.

The Democratic majority on the state’s high court had cited surging demand for mail-in ballots during the coronavirus pandemic and warnings that postal service delays could invalidate huge numbers of ballots to invoke the power, used previously by the state’s courts, to extend election deadlines during a disaster emergency.

Most states make Election Day the deadline, but more than 20 states — most of which backed President Donald Trump in the 2016 election — have a post-Election Day deadline.

Thursday's lawsuit is just one of several currently being fought in the courts and the Legislature over how Pennsylvania's election is being conducted as the state's 20 electoral votes are hotly contested by Trump and his Democratic challenger, former Vice President Joe Biden.

Already, more than 10 election-related lawsuits have been filed in court this year in Pennsylvania, prompting concerns that the presidential vote count will be heavily litigated and dragged out for weeks.

Republicans have characterized their efforts as intended to ensure election integrity and security, while Democrats have accused Republicans of voter suppression and intimidation.

The 11th-hour fight is happening in the shadow of Trump’s claims at a recent rally near Harrisburg that the only way he can lose Pennsylvania to Biden is if Democrats cheat, a claim he also made in 2016′s election.

Trump has singled out the Democratic bastion of Philadelphia, in particular, as a city whose election needs to be watched carefully by his supporters.

At least two other pending lawsuits — one filed by Trump's campaign in state court and one filed by Republican congressional candidates in federal court — are trying to force election boards in Philadelphia and Allegheny County, home to Pittsburgh, to let them send observers into satellite election offices.

Meanwhile, Boockvar has asked the state Supreme Court to declare that state law does not require or permit counties to reject a mail-in ballot solely over a perceived inconsistency between the signature on the ballot and the voter's signature in their registration file.

Such rejections pose “a grave risk of disenfranchisement" and without any opportunity for a voter to attest that the signature is theirs before the ballot is thrown out, her court filing said.

Republican lawmakers and the Trump campaign have argued that the law is clear that election officials must compare the information on the mail-in ballot envelope, including a voter’s signature, to a voter’s information on file to determine a person’s qualifications to vote.