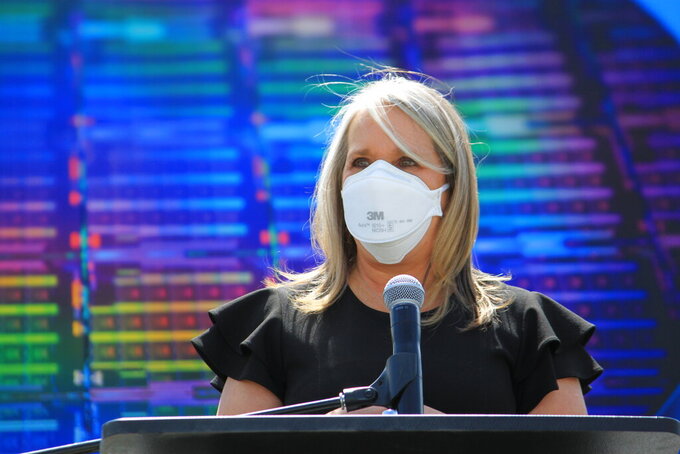 New Mexico Gov. Michelle Lujan Grisham discusses a planned $3.5 billion investment by Intel in the company's New Mexico operations during a news conference Monday, May 3, 2021 in Rio Rancho, New Mexico. The company will modernize its Rio Rancho plant so can begin producing an advanced packaging system that will allow for stacking tiles for better microchip performance. (AP Photo/Susan Montoya Bryan)

SANTA FE, N.M. (AP) — New Mexico's state government will receive $1.75 billion in pandemic relief from the federal government under the economic recovery plan from the Biden administration and Congress, the U.S. Treasury Department announced on Monday.

New Mexico is eligible to receive its entire state allotment of flexible federal aid immediately, because its unemployment rate has risen above federal thresholds during the pandemic.

The Treasury Department provided new detailed guidance on how states and local governments can spend the relief, under the $1.9 trillion pandemic relief law signed by President Joe Biden earlier this year. The law contains $350 billion of flexible aid for state and local governments, plus billions of dollars more for particular programs such as housing assistance.

Unlike past coronavirus aid, states have broad leeway to use the money to plug budget holes, address the economic impacts of the pandemic and invest in certain infrastructure.

Specifically, the guidance on Monday allows states to replenish unemployment trust funds to pre-pandemic levels. New Mexico Gov. Michelle Lujan Grisham and the Democrat-led Legislature both have signaled an interest in using a large portion of relief funds to rebuild the state’s unemployment fund, a move that would stave off future tax increases on businesses.

“The Unemployment Insurance fund remains a top priority, as does supplementing lost revenue for state agencies, in addition to focusing on behavioral health, broadband, and the recovery of economic drivers like the tourism and hospitality industry,” Lujan Grisham spokeswoman Nora Meyers Sackett said Monday. “The state is committed to distributing funds equitably and ensuring that the hardest hit communities receive the support they need.”

State Sen. George Muñoz of Gallup, a lead budget negotiator in the Legislature, said the conversation about the relief spending should focus on restoring economic stability and state income before the money runs out — a challenge when a single coronavirus infection still can suspend classroom attendance and prompt quarantines.

¨Use it wisely, use it correctly and make sure state revenues come back before you expend it all. ... That's my advice," he said.

At the same time, Lujan Grisham and the legislative leaders are engaged in a standoff over which branch of government has spending authority over new relief from the American Rescue Plan Act.

Lujan Grisham in April vetoed the Legislature’s proposal for about $1.1 billion in federal relief spending, including a suggested $600 million for the state’s unemployment fund and $100 million toward college scholarship programs.

The Democratic governor said in her veto message that “the Legislature lacks the authority” to tell her how to use the money. Leading legislators continue to assert their authority over federal money flows though the state general fund.