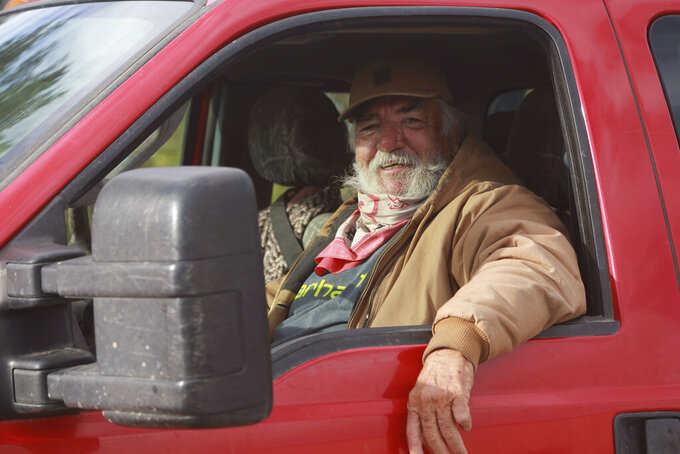 Cattle rancher Ray Roybal poses in his truck after casting his vote on Election Day on Tuesday, Nov. 3, 2020, at a middle school in Pojoaque, N.M.. (AP Photo/Cedar Attanasio)

Voter participation across the state shattered a prior record with 915,000 ballots cast, and about 2,000 absentee ballots still uncounted as county election boards recessed for the night to resume final counts Wednesday.

Luján rose to the No. 4 position in Democratic House leadership and ran uncontested in the primary. His election Tuesday to succeed Sen. Tom Udall as he retires marks a resurgence of Latino political leadership in a state with the largest share of Hispanic residents.

On the campaign trail, Luján emphasized support for consumer health protections under the Affordable Care Act and criticized President Donald Trump’s handling of the coronavirus pandemic and its economic fallout.

Luján said it will be up to the next Congress to prop up small businesses and “to ensure that there is going to be a vaccine that everyone can get at no cost. That way, it’s not unaffordable to people across the country that choose to take the vaccine.”

Luján also has presented himself as a proponent of new investments in clean-energy infrastructure projects and a supporter of the environmental efforts pursued by Udall, the son of former Interior Secretary Stewart Udall.

Biden’s statewide election victory without a campaign visit to New Mexico extends a string of victories for Democratic presidential candidates.

Trump had dispatched federal agents to Albuquerque amid his criticism of local Democratic leaders for their handling of crime and public safety issues in the months leading up to the election.

Ronchetti — a television-savvy, first-time political candidate — also seized on themes of law and order and cast himself as an ally of police and sheriffs' departments.

At the same time, Herrell staged a comeback in the 2nd Congressional District from her 2018 defeat while closely embracing Trump's policies and campaigning on support for gun rights, opposition to abortion and warnings against a slide toward socialism.

Democrats needed to pick up three or four seats in the U.S. Senate to take majority control, depending on who wins as president.

In New Mexico, registered Democrats outnumber Republicans by 14 percentage points, or about 180,000 people among the state’s approximately 1.35 million registered voters. But Republicans controlled the governor’s office as recently as 2018 in a state with strong currents of Roman Catholicism and an enduring Libertarian streak.

“For me it was a moral choice,” she said. “I believe that Black lives matter, I believe in a woman’s right to choose, so I wanted to vote for a candidate that reflects my beliefs.”

Support for Trump was also on prominent display.

“Biden is reading off a script. Trump tells it the way it is,” said 69-year-old cattle rancher Ray Roybal of Santa Fe County, as he cast a ballot for Trump and Rochetti at a voting center in the Pojoaque Valley of northern New Mexico.

Leger Fernandez said Tuesday she wants a new economic recovery bill of the same scale as the U.S. response to the Great Depression of the early 1930s.

The state’s top election regulator has estimated that the statewide vote counting effort is likely to extend through Wednesday or Thursday amid a surge in absentee ballots that take more time to verify and tally.

The entire Legislature is also up for election. Democrats are defending their state House and Senate majorities.

A ballot measure was approved that will overhaul the Public Regulation Commission that oversees electric utilities, pipeline safety and telecommunications. The panel will be made up of three members appointed by the governor instead of five elected commissioners.