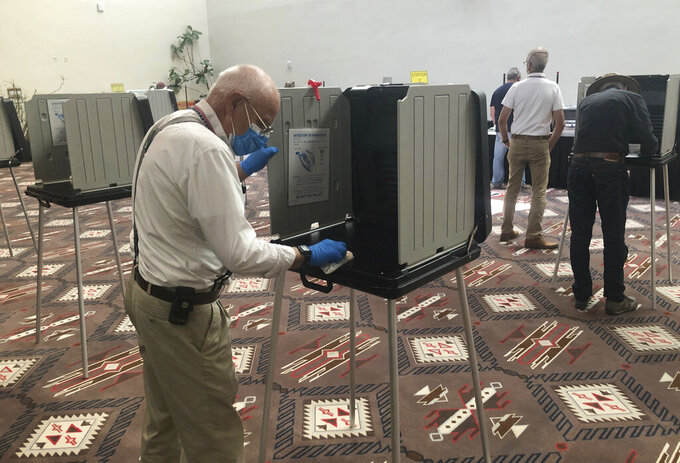 Temporary election worker Joseph Banar disinfects voting stations as a precaution against the coronavirus, on the first day of balloting in New Mexico at the Santa Fe Convention Center on Tuesday, Oct. 6, 2020, in Santa Fe. Election officials also are witnessing a massive surge in absentee ballot requests. (AP Photo/Morgan Lee)

State health officials said that intensive care units are full at two major hospitals out of three in Albuquerque as infections accelerate, a trend that could end up constraining other medial services.

“The virus is now winning," said Lujan Grisham. "This is a crisis level never seen before.”

She called the situation “horrifying" and urged people to limit daily outings whenever possible and return to a stay-at-home mentality. The governor hinted at new enforcement actions in instances of repeated violations of public health orders, without specifying exact measures.

The state imposed new rules to limit gatherings to five people or less, reduce hotel capacities and impose a 10 p.m. closing time for restaurants and bars. But health officials stopped short of more stringent restrictions used at the outset of the pandemic, when restaurant dining and nonessential retailers were closed and police barricades encircled the virus-ravaged city of Gallup to keep out visitors.

Lujan Grisham said that modeling projections for the contagion show infections can be contained with a disciplined approach to wearing face masks in public, fewer outings and no big gatherings. She said those precautions are slipping amid large family events and a haphazard approach to masks, with some outright resistance.

“If we don't, we don't even get to have the conversation about schools and kids,” she said. A small portion of public elementary schools are returning to in-person instruction on a part-time basis. Middle and high school classes are taking place remotely.

“We're in it for another nine months or longer," she said. “This is a marathon.”

New Mexico is listed as a region of “uncontrolled spread” by the covidexitstrategy.org website that is closely watched by state health officials for infection trends.

The statewide positive infection rate has crept into the “high risk” category used by New Mexico to evaluate risks associated with travel to other states.

The scale of the problem is reflected in a record-setting 611 rapid responses by state health officials to businesses and government institutions where infections turned up during the week ending Oct. 11.

The governor cited a 120% week-over-week increase in rapid responses to infections associated with restaurants, and a 98% increase in the retail sector.

“They are high risk, particularly for the indoor dining,” she said of restaurants.

Lujan Grisham said there are no indications that the resurgent pandemic will interfere with the rollout of widespread in-person voting on Saturday at hundreds of voting convenience centers, though new precautions may become necessary for elderly volunteer poll workers.

“We have some clerks' offices around the state who have staff out because of" COVID-19, she said. “Now you are losing staff during a critical time in their work.”

There were 150 people hospitalized in New Mexico for COVID-19 as of Thursday.

The seven-day rolling average of New Mexico's positive infection rate has risen over the past two weeks from 3.2% of those tested on Sept. 30 to 5.5% on Oct. 14, according to an analysis by The Associated Press of data collected by Johns Hopkins University Center for Systems Science and Engineering. The one-day positive infection rate surpassed 8% on Thursday.

Comparing seven-day averages of newly confirmed cases smooths out anomalies in the data, including delays in test results.

New Mexico ranks 25th among states in newly reported COVID-19 cases per capita over the past two weeks, amid surging infection rates in Mountain West and Midwest states.

The number of virus-related deaths of New Mexico residents related to COVID-19 is now at 922.