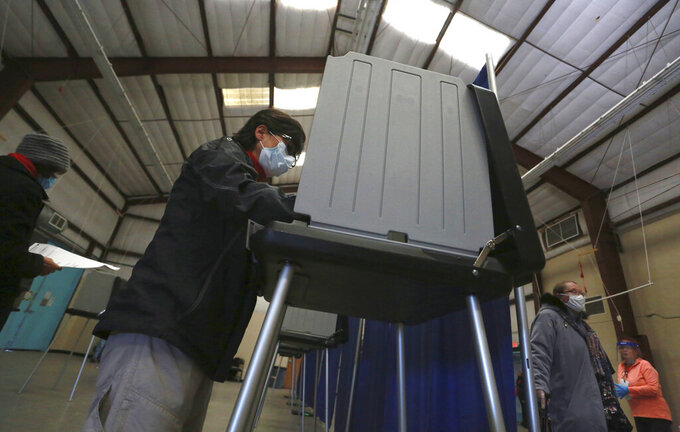 Three justices including the court's lone Republican, Judith Nakamura, denied the petition to intervene in the absentee voting process. Two Democratic justices recused themselves as they run for election against Republican challengers.

The lawsuit from Republicans including several state legislators and count clerks alleged that partisan challengers are being shut out of the initial verification process unnecessarily, based on privacy regulations.

Under pandemic-related voting procedures in New Mexico, absentee voters must sign and place the last four digits of their Social Security number on the outer envelope — concealed by a so-called privacy flap. For rejected ballots, clerks must send a notification to voters within one day.

The court's decision was applauded by the office of Democratic Secretary of State Maggie Toulouse Oliver.

“Voters in New Mexico should have confidence that their vote will count no matter if they are voting in person or by mail ballot and they should not be deterred by partisan legal maneuvering,” agency spokesman Alex Curtas said. “Partisan lawsuits questioning the integrity of our elections mere days before Nov. 3 only serve to confuse voters and undermine voter confidence."

In a statement, the Republican Party described the court's decision as flabbergasting and a “slap in the face."

“It’s sad that the justices will not take up a lawsuit that’s so critically important to ensure everyone’s ballot is accurately identified and verified,” GOP Chairman Steve Pearce said.

That complaint alleges that county election officials in Guadalupe County have left drop boxes unattended and without video surveillance in violation of guidance from the secretary of state's office. The lawsuit says the situation “leaves open myriad potential for election misconduct.”

The Republican Party asked for a court order to “ensure that all drop boxes are continuously monitored and that they are only open and accessible to the public during hours that the polls are open.”

The secretary of state’s office said in a statement Tuesday that it expects county clerks to follow the agency’s security standards and guidance for implementing drop boxes.

The agency has encouraged county clerks' offices to install ballot drop boxes to help minimize human contact and the risks of coronavirus transmission during the election process, while offering financial reimbursements through federal recovery funds.