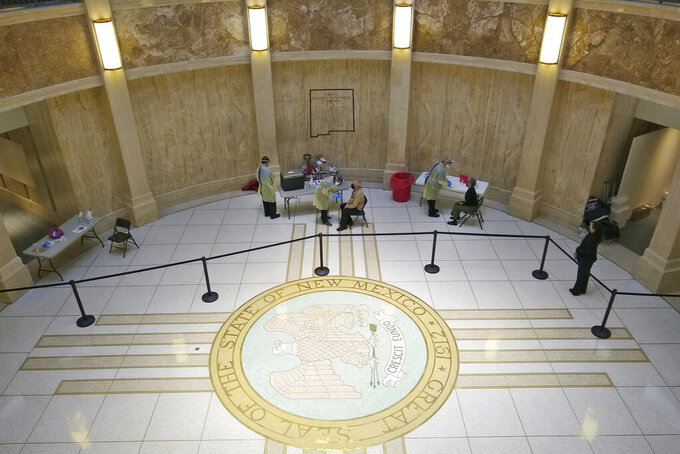 Heath workers administer COVID-19 nasal swab tests inside the New Mexico State Capitol Thursday, Jan. 28, 2021, in Santa Fe, N.M. State lawmakers convened this month for the opening day of a two-month legislative session. Capitol buildings are closed to the public due to the pandemic, and under strict security lockdowns due to the Jan. 6 attack against federal lawmakers in Washington D.C. (AP Photo/Cedar Attanasio)

SANTA FE, N.M. (AP) — The House of Representatives endorsed a tax increase Monday that would boost subsidies for insurance coverage on the state health insurance exchange.

The bill moves to the Senate for consideration. Gov. Michelle Lujan Grisham supports the bill.

A similar proposal to broadly increase the surtax on insurance premiums won House approval and stalled in the Senate last year, as the federal government repealed its health care provider fee that helped support state insurance markets established under the Affordable Care Act.

About 45,000 residents of New Mexico rely on the insurance exchange for health care. At the same time, separate enrollment has swelled during the coronavirus pandemic in Medicaid insurance for people living in poverty or on the cusp as the federal government pours extra money into the program.

As the economy recovers and Medicaid enrollment unwinds, state insurance regulators hope to lower costs for many consumers of marketplace insurance policies and broaden the enrollment pool to make the exchange more useful and sustainable.

House Republicans stood in unified opposition to the surtax increase. GOP House minority caucus chair Rebecca Dow of Truth or Consequences described the bill as an affront to small business amid the economic fallout from the pandemic.

“What we can do right now is assure our small businesses that we hear them,” she said.

The surtax increase from 1% to 3.75% would channel as much as $110 million toward marketplace subsidies initially with additional contributions to the state general fund.

This story has been corrected to show that Dow is the Republican House caucus chair.