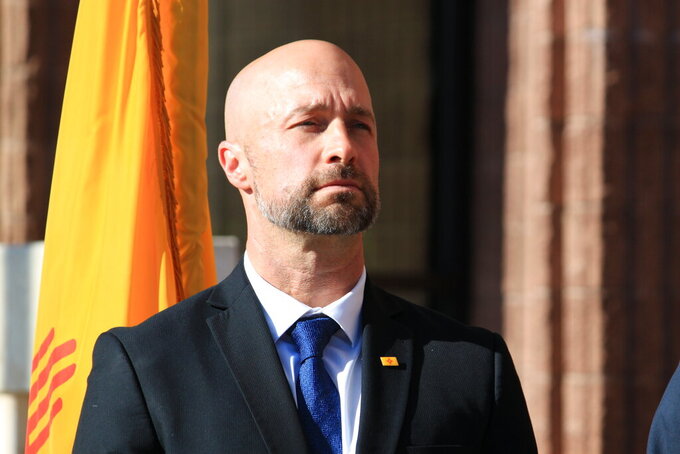 FILE - In this Sept. 12, 2019 file photo New Mexico Workforce Solutions Secretary Bill McCamley listens to questions about wage theft complaints during a news conference in Albuquerque, N.M. The head of New Mexico's labor agency is stepping down, just as the latest jobless numbers released Friday show over-the-year losses across all major sectors as the state struggles to recover from the economic fallout prompted by the coronavirus pandemic. McCamley's last day as secretary of the state Department of Workforce Solutions is Friday, the Santa Fe New Mexican reported. (AP Photo/Susan Montoya Bryan,File)

ALBUQUERQUE, N.M. (AP) — The head of New Mexico’s labor agency is stepping down, just as the latest jobless numbers released Friday show over-the-year losses across all major sectors as the state struggles to recover from the economic fallout prompted by the pandemic.

Bill McCamley’s last day as secretary of the state Department of Workforce Solutions is Friday. He acknowledged in a statement that the last year has been challenging but he's confident the agency will continue working hard to meet the needs of residents.

McCamley wrote in an email to employees this week that he was proud of their work over the last couple of years, particularly as the agency grappled with unprecedented unemployment claims.

“The effort, care and patience you have shown dealing with New Mexicans as we work through this pandemic together has been nothing short of heroic and I can do nothing but offer my highest praise to all of you,” he wrote.

Gov. Michelle Lujan Grisham's office said Ricky Serna, who previously served as deputy secretary at the Department of Workforce Solutions, will serve as acting secretary pending the search for a full-time replacement.

New Mexico has paid out more than $3.5 billion to displaced workers over the past year. Its unemployment fund was drained by September due to the high number of jobless claims, forcing the state to borrow around $234 million from the federal government so it could continue funding various unemployment programs.

State officials hope to use federal funding from the latest pandemic relief package to replenish the fund, but McCamley recently said that officials were waiting on guidance from the U.S. Treasury Department on how the funds can be used.

More than 100,000 New Mexicans currently are receiving weekly jobless benefits. Since last June, there have been between 2,000 and 5,000 weekly initial claims for jobless benefits, taxing a system designed for fewer than 1,000.

On Friday, the latest report issued by the agency put New Mexico’s seasonally adjusted unemployment rate for March at 8.3%. That's unchanged from February but up from 5.4% in the previous year. The national unemployment rate in March was 6%.

While all sectors have been hit, leisure and hospitality continued to report the heaviest employment losses in New Mexico, with a drop of 18,400 jobs — or nearly 19% — compared to the previous year. Mining, construction, education and health services also were down thousands of jobs compared to last year.

Aside from dealing with unemployment, McCamley had focused on trying to address a backlog of wage theft claims and boost workforce training initiatives early in his tenure.

During his time in the New Mexico House of Representatives, he chaired the labor and economic development committee. He also served as a Dona Ana County commissioner and as executive director of the New Mexico Rural Development Council, where he worked with small communities across the state on job creation, education and housing projects.