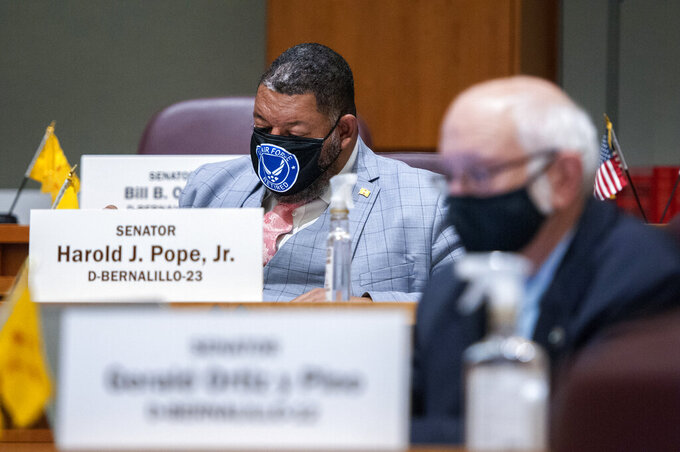 Sen. Harold Pope Jr., D-Albuquerque, left, and Sen. Gerald Ortiz y Pino, D-Albuquerque, work on the Senate Floor at the start of the 2021 legislative session in the State Capitol, Tuesday, Jan. 19, 2021, in Sana Fe, N.M. Pope is one of the 11 new Senate members this year. (Eddie Moore/The Albuquerque Journal via AP)

SANTA FE, N.M. (AP) — New Mexico lawmakers confronted daunting challenges as they began a 60-day session Tuesday amid an unrelenting coronavirus pandemic and concerns of violence at a Statehouse guarded by troops and encircled by fencing, barricades and mobile security cameras.

Proposals aimed at reviving the economy and rebooting classroom learning are at the top of the agenda for lawmakers in the Democratic-led Legislature. Democratic Gov. Michelle Lujan Grisham is pushing for a budget deal that would increase state spending on pandemic relief, education and health care.

“While we debate passionately in this chamber, we have created a culture of respect — no chaos,” Senate Majority Leader Peter Wirth said as the session opened. "We can do this together.”

House Republican leaders said their priority will be proposals that allow students to return to classrooms immediately by providing greater autonomy to school boards, teachers and families.

Most schools are providing remote learning only, with some small in-person lessons for younger students and special education students. Most classroom teaching was suspended in March, and education officials this week said schools can restart mixed schedules that include in-person lessons after an extended holiday pause.

“We've got to get our kids back in school. We've got to find a way,” House Minority Leader Jim Townsend said. “Children are retreating into isolation, into their electronic devices, instead of friendship. We have desperation setting in among those children."

The House came into session with calls in English and Spanish of “present on the floor” and “presente.” Most Democrats tuned in via videoconference from their offices, and most Republicans were on the House floor.

In the Senate, legislators in masks exchanged elbow bumps and sat down between Plexiglas barriers meant to reduce the spread of the virus. The rotunda and hallways of the Legislature — ordinarily buzzing with lobbyists, school groups and jewelry vendors — were eerily empty. The building is closed to the public.

Outside, there were no indications of protests amid warnings from federal authorities of possible insurrection attempts at statehouses.

Protesters last gathered outside the New Mexico Capitol in Santa Fe on Jan. 6 to peacefully dispute Joe Biden's presidential victory, while a violent mob stormed the U.S. Capitol in Washington.

A spending bill to cover the costs of the session includes $2 million for increased security. About $675,000 would go toward the state agency overseeing the National Guard.

Republican House whip Rod Montoya said the security measures in Santa Fe have left no room for any kind of public protests and weren't knowingly approved by House Republicans.

Lawmakers used their first day to lock in rules for videoconferencing and new leadership roles in the Senate after the ouster of several top Democrats in the November election.

The governor’s traditional State of the State speech at the opening of the legislative session has been postponed.

Democratic leaders have placed economic relief at the top of their agenda — including aid designed for front-line, low-wage workers.

Republican House leaders were the first to propose the aid to front-line workers, but they are vowing to fight major Democratic initiatives on taxes, abortion rights, medically assisted suicide and policing reforms.

For major policy reforms, all eyes are on the Senate and a new vanguard of progressive Democrats who campaigned on efforts to tap more education money from the state’s $20 billion permanent fund.

Native American legislators ascended to top committee posts in the Senate, with the appointment of Shannon Pinto of the Navajo Nation as chairwoman of a committee for Indian, rural and cultural affairs and Bennie Shendo of the Jemez Pueblo as chairman of a committee on tax, business and transportation policy.

The Senate's lead budget-writing committee will be led by Democratic Sen. George Munoz, a construction contractor from the trading post city of Gallup on the edge of the Navajo Nation that has been besieged by coronavirus infections.

A proposal to tap more money for education from a state trust will get a fair hearing, he said Tuesday.