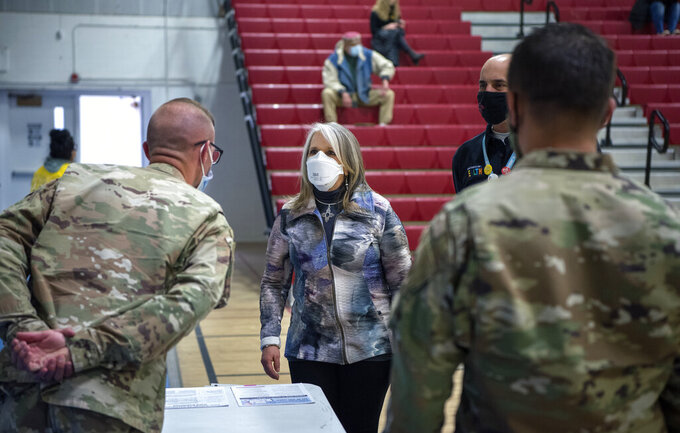 ALBUQUERQUE, N.M. (AP) — New Mexico health officials on Wednesday reported more progress in getting residents vaccinated as the state continues to lead the U.S. in the vaccine rollout.

State Health Secretary Dr. Tracie Collins said 50% of residents 16 and older have received their first shot and 31% are fully vaccinated. The latest figures come as other states look to expand distribution beyond health care workers and other priority groups to meet an April 19 deadline from the Biden administration.

While New Mexico opened up eligibility Monday, Collins said priority will still be given to those who are 75 and older and other senior citizens who have chronic conditions that put them at greater risk.

State officials also said more vaccine clinics are planned, including a dozen in southern New Mexico. They're also working with health care providers to target people who are home-bound, noting that about 1,000 doses have been administered so far to people in that group.

Despite the progress, the officials stressed that vaccinations along with continued public health restrictions such as mask-wearing will be important as COVID-19 variants emerge. They said the state's color-coded risk system for counties will likely remain in place at least through late May or early June depending on spread rates and daily case totals.

As of Wednesday, 10 of the state's 33 counties were classified as yellow, meaning there are more restrictions on commercial and day-to-day activities amid higher virus risk.

“I think we want to move in a general direction that takes everybody forward. I think the vaccine is the thing that's going to help us to do that, and I think that we just keep what we've got in place as a backstop in case in the unfortunate event that we would have to move back into it,” said Dr. David Scrase, head of the New Mexico Department of Human Services.

The distribution effort will benefit from funding included in the federal government’s most recent pandemic relief package, specifically $20 billion that the New Mexico Democrat says will supercharge vaccine distributions nationwide.

New Mexico also will get nearly $7 million in grants from the Federal Emergency Management Agency. That's on top of nearly $21 million previously awarded to the state Department of Health. The extra money is the result of the U.S. government waiving all cost-sharing requirements related to the federal disaster declaration that was issued last year.

The New Mexico National Guard has completed more than 1,230 missions amid the pandemic and has logged more than 1.6 million miles along with the Civil Air Patrol. The Guard also has set up and helped staff more than 200 drive-thru testing sites around the state, collected over 300,000 specimens, vaccinated more than 35,000 people and delivered tons of food, water and protective gear to communities.

Over 1,020 Guard soldiers and air personnel have been involved in pandemic-related missions since March 2020, officials said.