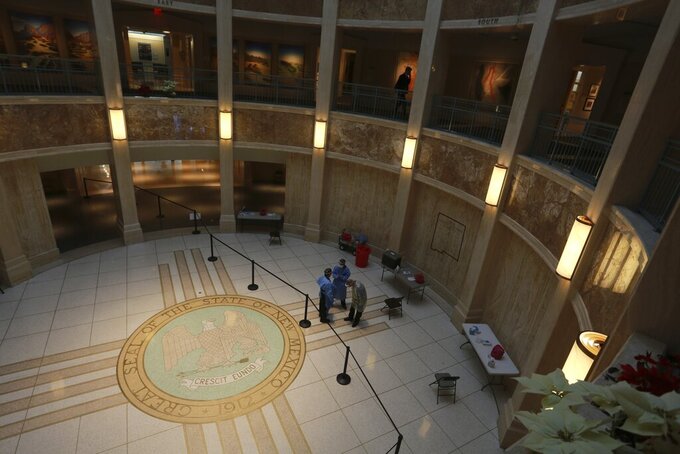 A man walks on the second floor of the New Mexico State Capitol building while emergency medical technicians wait to administer COVID-19 tests on Monday, Feb. 8, 2021, in Santa Fe, New Mexico. The building was closed to the public at the start of the pandemic. State leaders are holding most meetings virtually, with routine testing offered to legislators, staff members and the media. (AP Photo/Cedar Attanasio)

SANTA FE, N.M. (AP) — The Democrat-led state House of Representatives voted Wednesday to increase state spending on public education, health care and relief to businesses in efforts to chart a financial path out of the coronavirus pandemic.

The House endorsed a $7.39 billion general fund spending plan for the fiscal year that begins on July 1 on a 60-10 vote, with many leading Republican legislators opposed.

The budget bill would increase annual general fund spending by $332 million, or nearly 5% of current spending obligations. It now moves to the Democrat-dominated Senate for consideration and possible amendments.

It includes a 1.5% pay raise for public employees in state government, public schools and state colleges and universities.

Spending on public education would increase by 5.5% to nearly $3.4 billion annually. Many lawmakers in the Democrat-dominated Legislature also want to shore up state spending on Medicaid amid a surge in enrollment in the federally subsidized health care program for the needy.

“A pandemic as well as economic volatility is a challenge,” said Democratic state Rep. Patty Lundstrom of Gallup, chairwoman of the lead House budget committee. “We are versatile enough to recognize immediate needs.”

The budget proposal is linked to a package of pandemic-related economic relief that would provide $200 million in grants to businesses for rent and mortgage obligations and provide a $600 tax rebate to low-wage workers.

The spending plan would provide four months of state taxation relief for restaurants and pay off $325 million in debt racked up by the state unemployment trust fund -- avoiding an increase in payroll taxes on businesses to make up the difference.

Republican state Rep. Rebecca Dow criticized provisions of the budget bill that could increase funding to school districts that prolong online leaning without in-person options, citing concerns that some teachers may resist a return to classrooms in the fall with unvaccinated children.

“I just think that the teacher increases should have been made available to districts that put in the work to create and implement safe return-to-school plans,” Dow said.

Lundstrom said state funding for school districts is not linked to school reopening plans, though spending on a program that extends elementary school by five weeks is limited to in-person teaching.

“Our budget assumes that schools are all open in the fall — no crystal ball on what these districts are going to do,¨ Lundstrom said. “School districts don´t get the extended learning dollars unless they are in-person.”

New Mexico's state revenues have rebounded on surging production of petroleum and a rally in oil-market prices.

Federal pandemic financial relief in 2020 to state and local governments, businesses, school districts and the unemployed also have contributed to the state's anticipated budget surplus and a $2.5 billion reserve fund.

The budget proposal also takes aim at reducing a waiting list for services for youths with severe mental and physical disabilities.

It would dedicate more money to teen suicide prevention, and dedicate at least $20 million in new spending to college affordability programs.

“At a time of such unemployment, I think that was about $63 million in the budget that I personally found troubling,” Townsend said.

The Legislature has until March 20 to send a budget plan to Gov. Michelle Lujan Grisham, a Democrat.

This version corrects that Townsend voted for the budget bill.