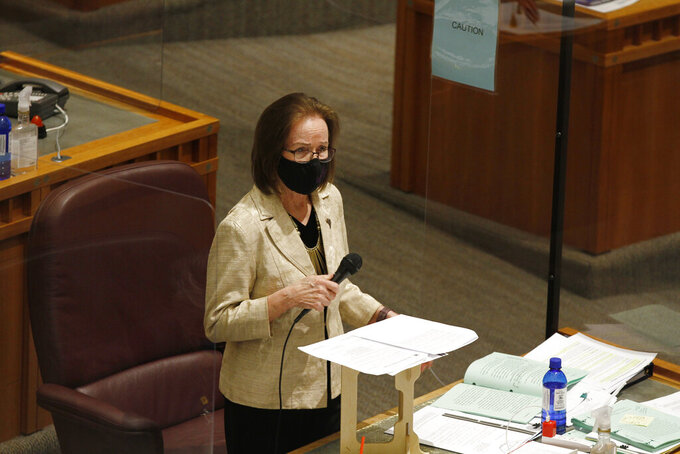 The Senate voted 25-16 to send the Healthy Workplaces Act to Democratic Gov. Michelle Lujan-Grisham, whose administration has signaled support for the bill.

If she signs it into law, all private-sector workers in the state would earn at least one hour of sick leave for every 30 hours worked, starting on their first day on the job and usable after their first month of work.

In the late-night debate, the Senate scrapped a provision that required an additional 80 hours of sick leave if the governor declares a health emergency in the future.

As passed, the law would not take effect until next year.

It's aimed at reducing the frequency that employees must choose between going to work sick or not getting paid, a dilemma for workers that has become more common amid the coronavirus pandemic.

In some cases, New Mexico workers said that led to their families becoming infected. People in impoverished areas of the state were up to seven times as likely to catch the virus than those living in higher-income regions, according to the Department of Health. Low-wage workers are less likely to have paid sick leave.

The measure was originally proposed as an emergency measure that would take effect this year, but it was amended to push back the mandate until July 2022.

The bill hit resistance in committee and again on the Senate floor over a section that excludes public-sector employees.

In a rare break of civility, Ivy-Soto and Stewart began to attack each other directly, instead of addressing the body in the traditional, impersonal style of the Legislature.

The exchange, around 10:30 p.m., became so heated that Lt. Gov. Howie Morales, a Democrat, interrupted twice to remind of decorum rules and the Senate unanimously decided to take 10-minute recess.

Public workers were ultimately excluded from the bill by a narrow vote after 2 a.m.

The bill also expands enforcement of employee recordkeeping laws, with fines for misclassification of full-time employees as part-time. It also mandates that certain labor complaints be taken to court by the state’s Labor Relations Division.

Employers opposed to the sick leave mandate characterized it as the latest anti-business blow from the Democratic-controlled Legislature, following an ongoing tiered minimum wage increase recently expanded to include teenage workers. One business owner vowed to pass his increased labor costs onto customers and to tell them why she was doing so.

“I will add a line to all of my checks that says ‘surcharge for New Mexico’s sick leave and minimum wage mandates,’ which won’t go over well with the guest. And then secondly, in five years my leases are up; I will leave,” said Albuquerque restaurateur Chris Zalesiak on Monday, ahead of the Senate vote.

She said sales are down 55% at The Melting Pot, a restaurant that serves fondues of cheese and chocolate and that she has been forced to cut her employee roster from 80 workers before the pandemic to 25.

Zalesiak, a member of New Mexico’s Small Business Association and Restaurant Association, said legislators should have worked more with industry to craft a compromise bill.

“If there was something like ‘you need to work a minimum of 30 hours for a year’ for sick leave to kick in,′ that would be more amenable, because I do believe, the more my employees invest in me, the more I invest in them.”

This article has been corrected to clarify that the 80-hour health emergency provision of the bill was scrapped during the debate. It was not passed as part of the law.