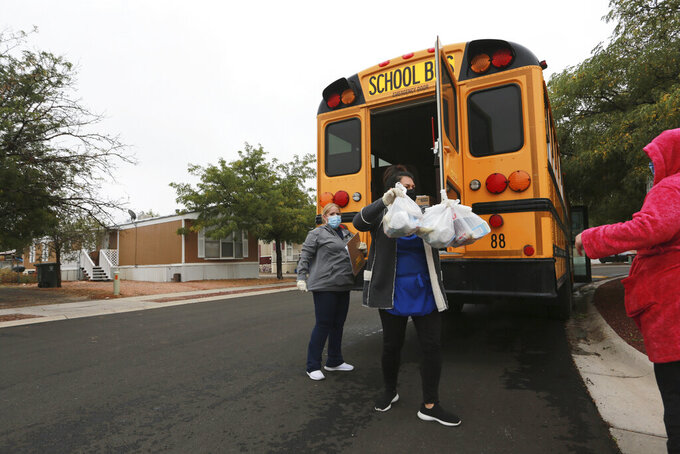 That's a slight improvement over last year when the state was 50th.

The group partners with the Annie E. Casey Foundation, which released the annual Kids Count report tracking 16 metrics of children’s access to education, health, economic and social stability at home.

He's cautiously optimistic that state policies "helped offset some of the health and financial problems caused by the pandemic.”

The report has ranked New Mexico at or near the bottom since 2012, giving low marks on education, economics and “family and community," a category that tracks rates of single-parent homes, teen birth rates and whether or not the head of household has a high school degree.

The challenges illuminated in the report have spanned multiple political administrations, each vowing to spend more money to address the problems that lead to poverty and negative outcomes for children. Much of the data used in the report predates the administration of Democratic Gov. Michelle Lujan Grisham.

One in five New Mexico children live in an area where 30% of the population is at or below the federal poverty line. Nationally, one in 10 children live in high-poverty areas, the report says.

In a low-income neighborhood in Albuquerque, an immigrant mother said she worked to ensure her son, who is now grown, didn't go hungry or fall in with a bad crowd.

One exception was when her son was about 11, and they came home to find their door forced open and the inside ransacked. That's a type of adverse childhood experience, a growing indicator of child well-being that's not tracked in the report.

“My son was afraid to come inside the apartment. We didn’t really sleep for three or four months,” she said.

There are bright spots for New Mexico in the report.

The state ranked 37th in child health, with kids having access to insurance that's on par with the national average, at 94%, and only slightly higher-than-average obesity, at 32%.

New Mexico still ranks last for education, despite significant progress. In 2019, 75% of students graduated high school within four years, up from 65% in 2012.

But other states have reduced dropout rates faster or at the same pace, leaving New Mexico at the bottom.

Carrillo's son is now 21. She says he's studying computer science and turning down job offers so he can finish his degree.

“I tell him that his only job is to study, that I'll take care of everything else," Carrillo said.