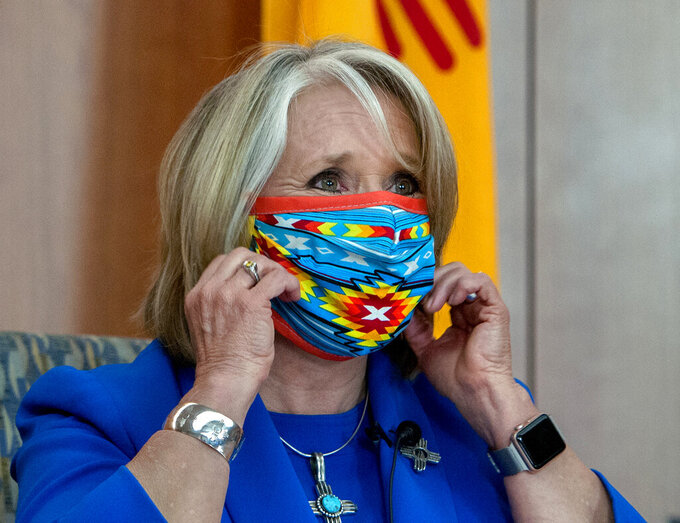 New Mexico Gov. Michelle Lujan Grisham removes her face mask at the start of an update on the COVID-19 outbreak in New Mexico and the State's effort to limit the impact of the disease on residents, during a news conference at the State Capitol in Santa Fe, N.M., Wednesday May 27, 2020. (Eddie Moore/The Albuquerque Journal via AP)

ALBUQUERQUE, N.M. (AP) — New Mexico health officials are reporting a new high for the COVID-19 daily case count as the state struggles with an ongoing surge.

Cases reported Friday totaled 1,287, bringing the statewide tally to nearly 52,400 infections since the start of the pandemic. Another six deaths were reported and hospitalizations again topped 400.

State officials warned Thursday that new records would be set over the coming weeks as the rate of spread remains high.

“The virus doesn’t stop spreading on its own. And it spreads exponentially, which means: We will see a whole lot more illness and death in our state unless and until New Mexicans turn it around,” Gov. Michelle Lujan Grisham tweeted Friday.

The latest figures come as the New Mexico Supreme Court detailed the legal reasoning behind a ruling made from the bench in August in a case brought by a group of businesses. They had challenged the public health orders issued as a result of the coronavirus pandemic. Lujan Grisham had petitioned the court to resolve the dispute.

In the unanimous opinion issued Friday, the court wrote that state officials have the power to impose civil penalties when enforcing public health orders that call for businesses to restrict their operations amid a public health emergency.

Lujan Grisham has warned that more restrictions could be imposed as early as next week as infections, hospitalizations and deaths continue to increase. She also said she has been disappointed in enforcement, pointing to businesses and country clubs in Albuquerque and elsewhere that hosted Halloween parties despite the ban on gatherings.

In the opinion, the court concludes that the Legislature gave the governor and other state officials power to enforce public health order restrictions on businesses through a provision in the Public Health Emergency Response Act. The court says the act provides for daily fines of $5,000.

The justices wrote that the law offers due process because state health officials must conduct an administrative hearing before a fine can be imposed.

The court declined to address whether the state must compensate businesses that are forced to close or take other actions because of the public health restrictions. The argument was that those actions result in a taking of private property by the government. The justices said there were insufficient facts in the record and in court filings to resolve the question.

Republican lawmakers and business owners across the state have been critical of the governor's responses to the pandemic. They said in October when restaurant operating hours and other restrictions were imposed that businesses were already struggling to stay open after months of restrictions.

The Republican Party of New Mexico said Friday it still disagrees with the outcome of the legal challenge.

“The court acknowledged that what the governor is doing is beyond the ‘enumerated powers’ she is given in the law and based its ruling on a ‘liberal construction’ of the law,” the party said in a statement. “We think that’s inappropriate when hundreds of thousands of New Mexicans’ livelihoods are permanently at stake.”

Lujan Grisham said she was disappointed that enforcement has to happen at all and that people should be doing what they can to limit social contact and stay home to prevent more spread. She also said law enforcement could and should do more to ensure people are abiding by the restrictions.

“We have to find better ways as a state and a nation to manage the virus because otherwise, what we’re faced with as a state is stay-at-home orders until next September or next November or next December,” she said. “I don’t think anyone anywhere in the world is thinking about trying to do that and sustain it for a year, for any number of reasons — not the least of which is you don’t have a way to recover from that economic collapse. That’s the issue.”