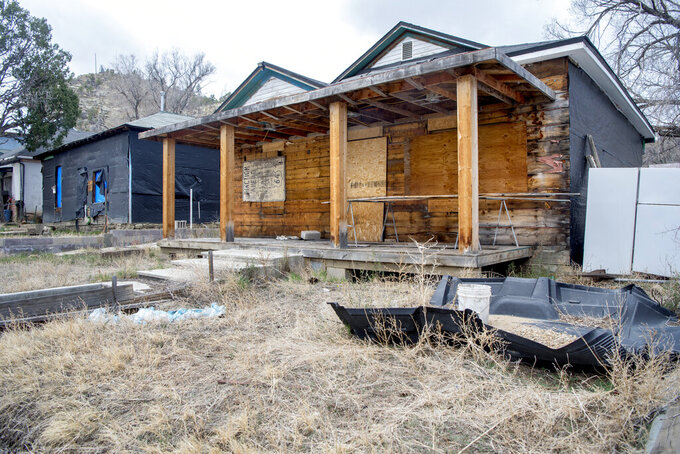 This Tuesday, April 27, 2021 photo shows boarded up houses on North 5th Street in Raton, N.M. Vacant buildings — some dilapidated and others that look recently abandoned — have become an unavoidable reality in Raton, a constant reminder to residents of their town’s current plight. (Eddie Moore /The Albuquerque Journal via AP)

Vacant buildings — some dilapidated and others that look recently abandoned — have become an unavoidable reality in Raton, a constant reminder to residents of their town’s current plight.

Entire blocks of the downtown area are filled with shuttered and unused properties, some of which have been empty for decades. A couple of miles away, in Raton’s historic north side, many homes are falling apart, large pieces of plywood attempting to cover scorch marks from where fires once burned.

For Raton City Manager Scott Berry, it’s a night-and-day difference from the town he grew up in. His grandmother lived in the neighborhood and he has fond memories from when the area was thriving.

“It really has changed over the years,” Berry told the Albuquerque Journal. “As a kid, I remember everybody had a lawn up front and flowers in the back.”

But it’s been many years since Raton’s economy was truly thriving. Now, city leaders are attempting to clean up their town and, hopefully, save it in the process.

Raton’s path mirrors that of many small towns in America that once relied on manufacturing jobs for employment. Coal mines and various factories used to employ hundreds in the area, a stable base that supported dozens of other local businesses throughout the town. The population peaked at around 8,000 in the 1980s.

Then came the all-too-familiar story. The mines began closing, with the last one shutting down in 2004, forcing hundreds out of work. Families began leaving. Some small businesses also started shutting down, with nothing to take their place.

Left in their wake were hundreds of vacant and unused buildings. Berry remembers it was 2008, at the onset of the Great Recession, when Raton’s vacant building crisis went from bad to worse.

“Most vacancies in downtown Raton have actually happened in the past dozen years,” he said. “We have struggled with that continuously since 2008.”

That includes two elementary schools that closed in 2015, victims of the town’s population decline — one is on the National List of Historic Places.

Many vacant buildings were constructed at the turn of the century, historic landmarks that go unused and deteriorate. In some cases, they collapsed after years of neglect, leaving only empty lots behind.

City Commissioner Lindé Schuster, who moved to Raton in the 1980s, has seen the social life of a once-vibrant town become practically nonexistent.

“We had bars where you could dance and have a drink, and we don’t have that any more,” Schuster said.

The city, though, was also slow to respond to the growing issue, made worse by a revolving door of public officials. When Berry took over in 2014, he was the sixth city manager in four years. In 2010, three of the five city commissioners were recalled, leaving the body without enough members to function.

Berry admits the city has only recently started addressing the issue.

However, city leaders are hoping to turn the tide. The commission recently passed a vacant building ordinance, requiring owners of abandoned homes and buildings to register their property with the city and pay an annual fee. The fees double every year a property remains vacant, with a maximum yearly payment of $2,500 for properties greater than 10,000 square feet.

It also will create a database of vacant properties in Raton, giving city officials a better understanding of the scale of the problem and what needs to be done.

One major hurdle to the issue is that the city doesn’t know exactly how many vacant buildings and homes there are, although Berry estimates there could be around 200.

The goal of the ordinance, Berry said, is to get owners to “do something” with their buildings. The city spends thousands on cleaning up dilapidated properties, losing thousands more from owners who don’t pay taxes on them.

And vacant properties are not a problem unique to Raton.

Daniel Gutierrez, executive director of New Mexico MainStreet, works on rehabilitating downtowns in areas across the state, and said deteriorating buildings can be found throughout rural New Mexico, where populations have declined for decades.

“It’s more prevalent in rural communities,” Gutierrez said, adding it can be difficult to pump money into those areas.

Passing an ordinance, though, may have been the easy part. Many owners of Raton’s vacant buildings live out of state and Berry expects many to ignore the city when they’re asked to pay the fee.

As a result, Raton expects having to launch dozens of court cases to compel owners to register their properties. Those cases could cost the city around $100,000, Berry said.

But, from city’s perspective, the potential benefits outweigh the costs. Like many other western towns, Raton has seen increased interest during the COVID-19 pandemic, as people move from urban centers into more remote areas.

However, with so many homes and buildings in dilapidated condition, Raton lacks the infrastructure necessary to take full advantage. The hope is that, where there are improvements to infrastructure, investment will follow.

In particular, Raton is hoping to grow its outdoor recreation market and attract visitors on their way to such sites as Sugarite Canyon State Park.

One model Raton is hoping to replicate is that of Colfax Ale Cellar. Owners Jim and Karen Stearns opened the brewery in 2017, after moving from Albuquerque, and said it was the perfect location for their business.

“It pretty much met all our criteria,” Karen Stearns said.

The 113-year-old building had sat vacant for around 30 years before they bought it and they ended up spending around $150,000 just on renovations. But the Cellar has become one of Raton’s most successful business stories in years.

The Stearns say they’ve fallen in love with the building and Raton, and hope others choose to invest in it, as well.

“People want to go where things are happening,” Karen Stearns said. “If you have a number of places within walking distance, it definitely boosts business.”

As with many small towns, many of Raton’s residents have lived there for generations and rehabilitating their town is something they take personally. For the first time in a long time, Berry said, there’s reason to feel optimistic, even if just a little.

“It really hurts your feelings,” he said of Raton’s decline. “The only way you can (rebuild) it is if everybody steps up.”