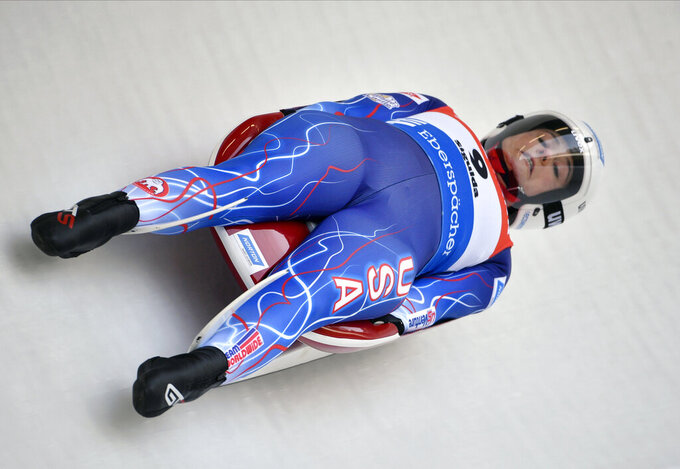 FILE - In this Jan. 25, 2020, file photo, Emily Sweeney, of the United States, speeds down the track during a women's race at the Luge World Cup event in Sigulda, Latvia. USA Luge’s Sweeney is returning to the World Cup circuit. The Army National Guard member, who was told by military officials that she couldn’t compete during the pandemic, now has permission to head to Europe and finish the season.(AP Photo/Roman Koksarov, File)

USA Luge is getting another medal hopeful back for the final stretch of sliding season.

Emily Sweeney — who thought her competitive season was over — now has permission to fly back to Europe and rejoin the World Cup circuit. She, like all members of the U.S. Army’s World Class Athlete Program, did not have permission to compete while actively serving because of the threats presented by the coronavirus pandemic.

But WCAP since amended its thinking and Sweeney, a member of the National Guard, received official orders this week permitting her to race again. She will need to get through some COVID-19 tests before being allowed to return to the International Luge Federation’s bubble.

“There are a lot of extra hoops that we have to jump through to make this a responsible activity,” Sweeney said from USA Luge's training base in Lake Placid, New York. “But, at the root of it, to do all these extra things to be able to do what we love, that’s huge. So, once I’m on the other side of this travel day and I’m in the FIL bubble, and I can kind of exhale completely, the fun will continue.”

She had filed paperwork repeatedly asking permission to compete and used leave time to get into one race in Koenigssee, Germany, earlier this month — finishing 10th to lead all U.S. sliders. From there, she had to get back home before her leave time was up, then got the word that she was cleared to go back.

Sweeney won’t be with USA Luge in time for this weekend’s World Cup races in Oberhof, Germany. Assuming her tests come back negative, Sweeney will race in Igls, Austria, next weekend, then the world championships Jan. 29-31 in Koenigssee, and the World Cup season finale the following week in St. Moritz, Switzerland.

She won a bronze medal in the 2019 world championships and a strong finish this season would provide plenty of momentum heading into next season — an Olympic season. Sweeney competed in the Pyeongchang Games in 2018.

“After coming home and getting in some great start training, getting back into an actual gym to feel strong again, I feel ready,” Sweeney said.

Sweeney’s first trip to Europe this season wasn’t without challenges. Parts of her sled got lost; checked in for a direct flight from Newark to Frankfurt somehow meant the parts wound up in Washington before eventually making their way to Germany. Flying was awkward as well; she was in a row by herself on the way over, but the last leg of the flight home was on a filled plane.

And now, a few days later, she’ll be back in the air. She’s concerned, yes, but equally excited.

“Sports are so special,” Sweeney said. “There’s a reason that there’s a pandemic going on and sports are still happening in very controlled and responsible environments. The fact that we are able to do this is incredible.”