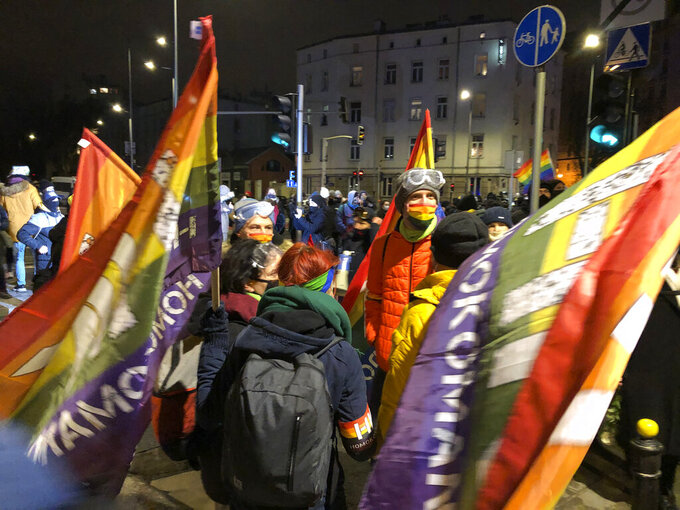 People gather in Warsaw, Poland Wednesday Jan. 27, 2021 to protest after the country's top court on Wednesday confirmed its highly divisive ruling that will further tighten the predominantly Catholic nation's strict anti-abortion law. The Constitutional Tribunal published the justification of its decision, which means it can now be officially printed and take immediate effect. (AP Photo/Czarek Sokolowski)

The unrest shows growing discontent among many Poles with the right-wing government. Under it the country was seen as a key European ally of former U.S. President Donald Trump's administration, but has been criticized by European officials for eroding democracy. It remains to be seen what kind of relations it will be able to build with the new U.S. administration.

Opposition parties strongly criticized the move by the Constitutional Tribunal, following which the ruling will come into effect once it's printed — later Wednesday or early Thursday — in the official government gazette.

Thousands of people gathered outside the court building in Warsaw late Wednesday, responding to calls for new protests by women’s groups that led weeks of massive demonstrations last year against the initial Oct. 22 ruling. Protests were also held in many other cities, under a heavy police presence.

In Warsaw, protesters later marched through the city center to the ruling party's headquarters with signs of the leading “Women’s Strike” group and pro-LGBT rights rainbow flags. Like in last year's demonstrations, they defied Poland’s pandemic ban on gatherings.

No violence was reported on either side. Some of last year's marches led to clashes with police.

The ruling right-wing Law and Justice party is widely seen as having undue influence on the judiciary following reforms it passed affecting the way judges are appointed. The Constitutional Tribunal was the first to have some of its judges appointed the new way, in 2016.

The main opposition Civic Platform party condemned the court's move Wednesday as “a provocation” by Law and Justice.

“The government is trying to cover up its incompetence (in dealing with the pandemic) and is doing that in a cynical way,” Civic Platform leader Borys Budka tweeted.

The court ruling bans the abortion of fetuses with congenital defects, and critics argue that it narrows the already tight law to a near total ban of abortions. It was made in response to a motion from over 100 ruling party lawmakers, whose names have not been made public.

Termination of pregnancy will now be allowed only if the woman's health is threatened or if the pregnancy is the result of a criminal act, such as rape or incest.

Until now, congenital defects were the reason behind most legal abortions in Poland.

A prominent lawmaker for Law and Justice, Marek Suski, said work will begin on an entirely new abortion law that will take into account lethal defects. It would replace the current 1997 law, based on a compromise with the Catholic Church and widely criticized.