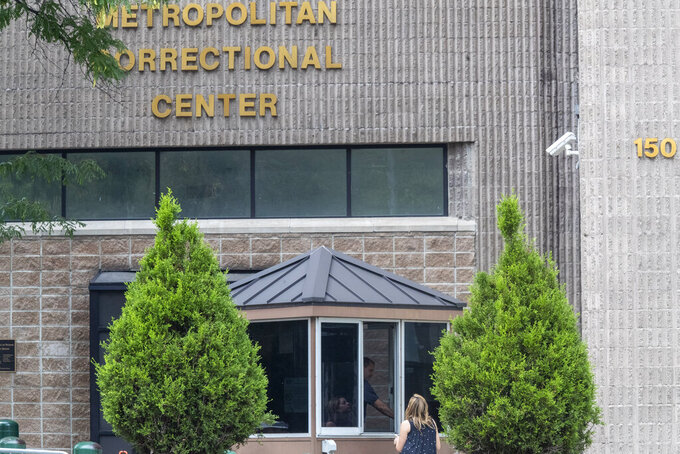 FILE - In this Aug. 13, 2019 file photo, an employee checks a visitor outside the Metropolitan Correctional Center in New York. The warden brought in to clean up the embattled federal jail where Jeffrey Epstein killed himself has abruptly stepped down after a year-long tenure marred by the rampant spread of coronavirus, inmates complaints about poor conditions, a gun smuggled into the facility, and an inmate's death. (AP Photo/Mary Altaffer, File)

WASHINGTON (AP) — The interim warden appointed to run the federal jail where Jeffrey Epstein died was put in the position after serving as the executioner for at least five federal executions at the end of the Trump administration.

The federal Bureau of Prisons named Eric Williams as the interim warden at the Metropolitan Correctional Center in New York City in late January after the prior warden, Marti Licon-Vitale, abruptly stepped down. Her yearlong tenure was marred by the rampant spread of the coronavirus, inmates’ complaints about squalid conditions, a gun smuggled into the jail and at least one inmate’s death.

Williams was appointed to the high-profile warden position a little more than a month after his last execution, having played a central role in the Trump administration’s unprecedented run of capital punishment and serving as the executioner for at least five of the 13 executions in six months. He was previously the warden of a medium-security federal prison in Illinois.

During the executions, Williams, wearing black gloves, stood directly next to the inmates as they were strapped to a gurney. He read aloud the death warrants into a microphone before asking if the condemned inmates wanted to make a final statement. When he asked inmates if they had any last words, he spoke in a cool, officious-sounding voice, never appearing to offer the dying inmates solace. As the executions proceeded, Williams would keep his eyes fixed on the dying inmates.

The AP reported last week the executions at the end of Trump's presidency, completed in a short window over a few weeks, likely acted as a coronavirus superspreader event, something health experts warned could happen when the Justice Department insisted on resuming executions during a pandemic. About 70% of death row inmates were sick with COVID-19 just days after Bernard’s execution and staff members, including members of the execution team, and media witnesses also contracted the virus after other executions.

The Bureau of Prisons did not respond to questions from the AP about who offered Williams the job, how he had been selected for the position — one of the most high-profile warden positions, in charge of a facility billed as one of the most secure jails in America — and whether his role in the federal executions was a factor in his appointment.

In a statement, the agency said “a number of decisions have been made during the pandemic based on the BOP’s correctional needs as well as other factors such as family, medical, and other concerns” and as a result of that, Williams was temporarily assigned to the New York City jail until a new warden is appointed.

Licon-Vitale’s abrupt departure from the Bureau of Prisons — which a spokesperson described as a retirement — came about after staff at the jail left an inmate who, according to the inmate's lawyer, has the mental capacity of an 8-year-old child in a holding cell for 24 hours while awaiting a competency evaluation, a violation of prison system regulations.

In the weeks before her retirement, a correctional officer at the facility had reported sexual misconduct by a superior, which officials at the jail delayed reporting to senior Bureau of Prisons officials, three people familiar with the matter told the AP. The people could not discuss an ongoing investigation publicly and spoke to the AP on condition of anonymity.

Williams is the fourth warden at the New York City lockup in 18 months, and the third person put in charge since a shakeup following Epstein’s death in August 2019. Epstein’s death a month after his arrest on child sex trafficking charges — which former Attorney General William Barr called a “perfect storm of screw-ups” — has been a lingering shadow over the 600-inmate facility in lower Manhattan.

The Justice Department’s inspector general is still investigating the lapses that allowed the wealthy financier to end his life while in federal custody. Two correctional officers responsible for monitoring him that night are awaiting trial on charges they lied on prison records because they were sleeping and browsing the internet instead of doing their jobs.

Williams joined the Bureau of Prisons in 2003 as a correctional officer at a prison in Texas and most recently served as the warden at FCI Greenville in Illinois.