New this week: 'Girls5eva' and 'The Boy From Medellín' 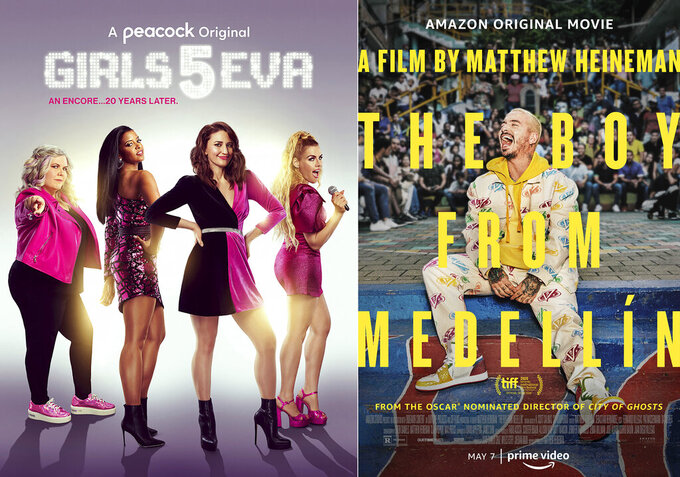 This combination of photos shows promotional art for "Girls5eva," a Peacock original series premiering Thursday, left, and "The Boy from Medellin," a film premiering Friday on Amazon. (Peacock/Amazon via AP)

— Eight months after first debuting in theaters, Christopher Nolan’s “Tenet” is finally streaming. Whereas many other releases during the pandemic have quickly detoured to streaming services, “Tenet” stuck to the traditional route. The film, the first big studio movie released in theaters during the pandemic, last August attempted to lead a return to moviegoing. For Nolan, a champion of the big screen, it was a defining moment. But the film’s release struggled with many theaters still closed. With “Tenet” now streaming on HBO Max, fans who missed it earlier can catch Nolan’s follow-up to “Dunkirk,” a time-bending sci-fi thriller that in an earlier review I praised as “a cool, brutalist refresher of the movies’ capacity for awe.” It won an Oscar for its visual effects.

— In “The Boy From Medellín,” filmmaker Matthew Heineman (“Cartel Land,” “A Private War”) trails Colombian pop star J Balvin in the week leading up to his first solo stadium concert in his hometown. Streaming Friday on Amazon Prime, the movie is an intimate look at the reggaeton superstar with his candid reflections on fame. It also doubles as a profile of Medellín, which during the time of the documentary was in throws of political unrest and street protests.

— B-movie dynamite who flared with menace, brutality and complexity, Robert Ryan remains one of the movies’ greatest and most essential actors, one whose power and compassion is just as potent today as it was in the postwar years that he helped define on screen. Ryan was, famously, an incredible paradox. On-screen, he was a racist, a bigot, a gangster and a bully. Off-screen, he was one of Hollywood’s leading progressives and a social activist. The Criterion Channel has assembled some of Ryan’s best in a new streaming series and a delicious feast of noir. Highlights include Nicholas Ray’s “On Dangerous Ground” (1951), with Ryan as a hardened and solitary police detective changed by a case in the country and an encounter with a blind woman (Ida Lupino); John Sturges’ “Bad Day at Black Rock” (1955), a taut, 81-minute thriller about a stranger (Spencer Tracy) in a strange desert town run by Ryan; and Robert Wise’s electric portrait of racial divided ’50s America, “Odds Against Tomorrow” (1959), with Ryan as a racist ex-con teamed with Harry Belafonte (a real-life friend of Ryan’s) for a heist.

— Heart’s Nancy Wilson is dropping her first-ever solo album on Friday. The Rock and Roll Hall of Famer is set to release “You and Me,” which was mainly recorded in her California studio. The 12-track set includes eight originals and four covers, including re-workings of Pearl Jam’s “Daughter,” Simon & Garfunkel’s “The Boxer,” the Cranberries’ “Dreams” and Bruce Springsteen’s “The Rising.” Special guests on the album include Sammy Hagar, Duff McKagan of Guns N’ Roses, Taylor Hawkins of the Foo Fighters and Liv Warfield. “You and Me” closes with the track “4 Edward,” Wilson’s tribute to Eddie Van Halen, who died last year.

— Grammy-winning saxophonist-composer Ted Nash has an A-list co-star on his latest album: Glenn Close. The performers have joined forces to release the spoken word jazz project – “Transformation: Personal Stories of Change, Acceptance, and Evolution” – on Friday. The packed album includes contributions from Wayne Brady, Amy Irving, Matthew Stevenson and the Jazz at Lincoln Center Orchestra with Wynton Marsalis. Nash’s son, Eli, even appears on the album, participating in the emotional and brave track, “Dear Dad/Letter.”

— Mostly recorded outdoors in five days in Marfa, Texas, last November, songwriting trio Miranda Lambert, Jack Ingram and Jon Randall came together to create “The Marfa Tapes,” out on Friday. The group’s chemistry is strong and alive on the album, which fans got a preview of when they performed at last month’s Academy of Country Music Awards. A day after the album’s release, a film about its creation will be available on Lambert’s Facebook page for 24 hours. It will include live performances, interviews and behind-the-scenes footage.

— PBS’ “American Masters” series profiles Amy Tan, who has steadily built on the foundation of her acclaimed 1989 debut novel “The Joy Luck Club” with works including “The Kitchen God’s Wife” and “The Valley of Amazement.” The film recounts Tan’s life and career with archival footage, animation and original interviews, including with Tan and fellow authors, among them Isabel Allende, Kevin Kwan and Dave Barry. James Redford, son of actor Robert Redford, directed the film, completing it shortly before the documentarian’s 2020 death of cancer at age 58. “Amy Tan: Unintended Memoir” airs Monday on PBS stations (check local listings for time) and will be available on PBS.org and on the PBS app.

— Movie favorites aren’t just on streaming and cable. Dory, Rapunzel and Tiana are among the stars of “The Wonderful World of Disney” film series, back for May on ABC. An animated film will air each Monday at 8 p.m. EDT, starting Monday with “Incredibles 2,” featuring Holly Hunter, Craig T. Nelson and Samuel L. Jackson in the voice cast. The rest of the slate: “Finding Dory,” with Ellen DeGeneres and Albert Brooks, on May 10; “Monsters, Inc.,” with Billy Crystal and John Goodman, May 17; “Tangled,” with Mandy Moore as Rapunzel, May 24; “The Princess and the Frog,” with Anika Noni Rose as Tiana, May 31.

— Can one-hit wonders get a second chance at stardom? That’s the hopeful premise of “Girls5eva,” an eight-episode comedy about a 1990s “girls group” that grabs an unexpected grown-up opportunity to reunite. The odds for success and laughs seem promising, given the cast and makers. Tina Fey and Robert Carlock (“30 Rock,” “Mr. Mayor”) are among the producers of the show created by writer Meredith Scardino. The stars are Sara Bareilles; Busy Philipps; Tony-winning actor and singer Renée Elise Goldsberry, and actor-writer Paula Pell. The series is out Thursday on the Peacock streaming service.