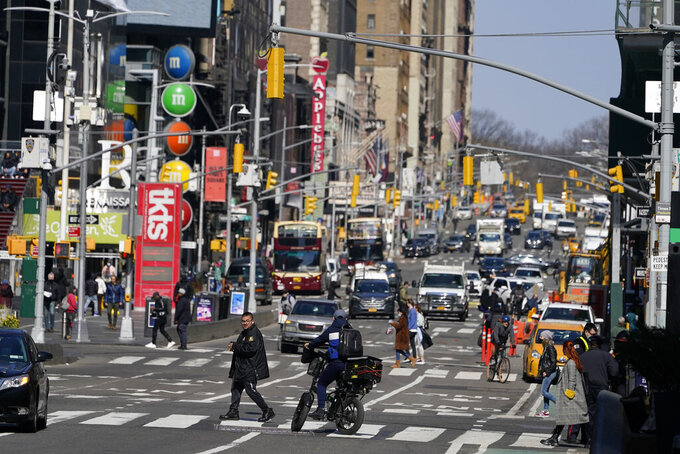 People enjoy a sunny day in Times Square in New York, Wednesday, March 10, 2021. After the virus descended on New York, the only sounds in the streets were wailing ambulance sirens. A year after the pandemic began, the nationÃ¢â‚¬â„¢s largest metropolis -- with a lifeblood based on round-the-clock hustle and bustle, push and pull -- is adapting and showing new life. (AP Photo/Seth Wenig)

NEW YORK (AP) — New York City is taking steps toward the reopening of the city's theaters, creating vaccination and testing sites for stage workers in a bid to restore a key part of New York's draw.

“It’s time to raise the curtain and bring Broadway back,” Mayor Bill de Blasio said during a virtual press conference Thursday. "The work we have to do now to get the theater community ready to make sure that this extraordinarily wonderful and important industry is good to go for the fall, we’ve got to do that now.”

De Blasio said the city needs guidance from the state on issues like whether audiences need to bring proof of vaccination and whether masks be required.

Broadway producers and the union that represents stage actors and stage mangers both reacted positively to the news.

“Vaccination and testing sites for theatre workers are a great step towards recovery and bringing Broadway back," said a statement from The Broadway League. "Our community has suffered catastrophic losses, and the sooner we can return to share our stories in a safe and secure way, the better our city will be.”

“Today’s announcement is an important recognition from the City of New York that a strong theatre industry means a healthy, strong economy,” she said in a statement. "It is clear that we were heard and the city is pushing forward-looking policy changes that will serve the entire theatrical community. We are grateful for the leadership of Mayor de Blasio.”

Tony Award-winner Actor André De Shields joined de Blasio at the briefing and said, “New York is on its way back, but it will not completely arrive until not only Broadway but all theater across this great city has returned.”

He added, “We’re ready. We’ve stayed in shape. Our voices are strong. All we need is a stage, and from what you’ve shared with us just now you’re going to take care of that.”