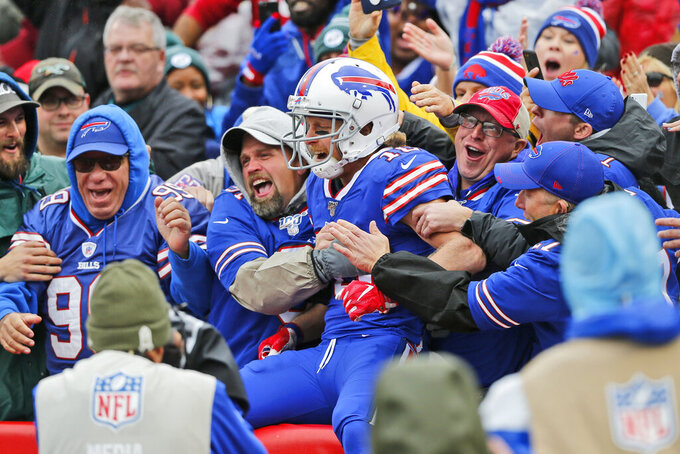 FILE - In this Sunday, Oct. 27, 2019 file photo, Buffalo Bills' Cole Beasley celebrates his touchdown with fans during the first half of an NFL football game against the Philadelphia Eagles in Orchard Park, N.Y. New York is making an exception to its restrictions on large gatherings to allow about 6,700 fans to attend a Buffalo Bills home playoff game in January 2021 as long as all test negative beforehand.(AP Photo/John Munson, File)

ALBANY, N.Y. (AP) — New York is making an exception to its restrictions on large gatherings to allow about 6,700 fans to attend a Buffalo Bills home playoff game in January as long as all test negative beforehand.

That’s about 10% of the stadium's capacity. Gov. Andrew Cuomo said the football team staff will only allow fans with negative tests to enter the stadium, where they will be seated distanced apart. Fans must wear masks once they leave their vehicles in parking lots until they return to their vehicles, and will be asked to leave if they take off their masks.

Cuomo, who had sent health department staff to study COVID-19 protocols at stadiums in other states, defended his administration's efforts to allow fans at the game at a time when more then 11,000 New Yorkers a day are testing positive for COVID-19.

He said the pilot program could be a model for re-opening businesses with rapid testing, which his budget director Robert Mujica said will be conducted in the three days before the game. Cuomo is directing his department of health to contact trace all 6,700 fans following the game.

The department didn’t immediately provide specifics on the pilot program, including whether the state has the resources to contact trace all the fans in the days following the game. Fans must follow state guidance that requires individuals who are exposed to COVID-19 to quarantine for 10 days.

“We believe we are the first state in the nation to run this kind of pilot. We believe it can be very instructive to us going forward," Cuomo said.

State Health Commissioner Howard Zucker previously said he was looking into how to address the potential for a post-game surge because of fans gathering before and after the game.

Zucker and Cuomo urged all fans Wednesday to not hold and attend tailgates, parties and other large gatherings.

The team, on its website, said tickets will be offered to club seat and season ticket holders, based on seniority, and likely not the general public. Fans will have to pay the $63 cost of testing. The game will be played on Jan. 9 or 10.

The Bills have clinched their first AFC East title since 1995. They will host a playoff game for the first time since a 30-27 wild-card playoff loss to Jacksonville on Dec. 28, 1996, in what proved to be Bills Hall of Fame quarterback Jim Kelly’s final game.