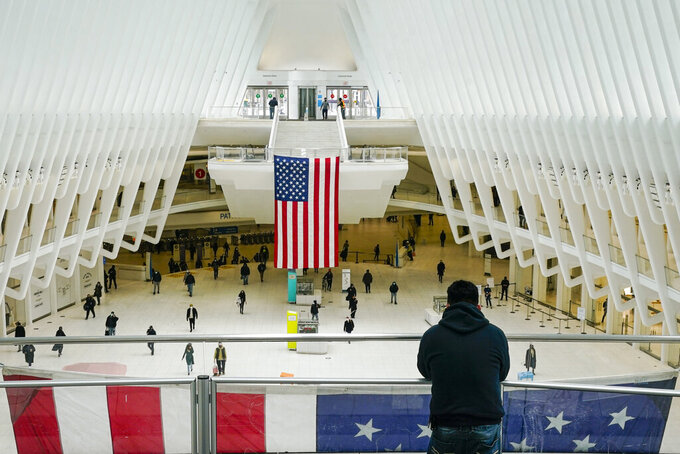 NEW YORK (AP) — With somber words and music set against a backdrop of images of New Yorkers taken by the coronavirus pandemic, the city on Sunday marked a year since they learned of the state's first fatalities from COVID-19, a fearful moment of reckoning that sent officials rushing to close businesses and schools.

The elaborate evening ceremony on the Brooklyn waterfront paid tribute to the approximately 30,000 city residents killed by the coronavirus since March 2020. The event began with a performance by the New York Philharmonic and included remarks by faith leaders and poetry from the city’s youth poet laureate.

Throughout the ceremony, images of New Yorkers lost to the pandemic were projected onto the Brooklyn Bridge in the background.

“We come here today to remember the many, some of whom we never met, all of whom we must never forget,” Rabbi Joseph Potasnik, executive vice president of the New York Board of Rabbis, said.

Carolina Juarez Hernandez, whose father died from COVID-19 last April, remembered a man who came to New York from Mexico in search of a better life and found work as a welder, and became a big New York Yankees and New York Giants fan “because he loved New York so much.”

Similar to the experiences of so many in New York and elsewhere, Juarez Hernandez was unable to see her father as he lay dying. She recalled the moment he was taken to a restricted area of the hospital.

“I didn't think to hug him goodbye," she said. "So I said, 'I’ll talk to you later.’ To this day I regret not giving him that hug. Because I never got to see him in person again.”

A visibly emotional Mayor Bill de Blasio called the total number of lives lost in the city “a number we can barely imagine,” and noted it represented more than the city lost in World War II, Vietnam, Sept. 11 and Superstorm Sandy combined.

As devastating as the losses have been, he added, "everyone we've lost, what they did, goes on. What they contributed, what they created, the love they gave, goes on.”

For many, those first fatalities brought home the reality that the pandemic was no longer some distant threat.

The first death in the city happened March 11, though officials wouldn't learn of it until later. Broadway theaters and other large entertainment venues were ordered shut March 12. The mayor ordered schools closed March 15. Bars and restaurants followed. Schools shut statewide a few days later. On March 20, Gov. Andrew Cuomo announced he was barring gatherings of any size, for any reason, anywhere in the state.

During a 10-day stretch in April, New York City averaged 750 deaths per day.

The lockdowns and strict compliance with social distancing rules worked. By late spring, fatalities had plummeted and the region enjoyed some of the nation's lowest infection rates until a resurgence in the fall.

The death toll in the broader New York City metropolitan area, including its suburbs in Connecticut and New Jersey, now stands at more than 65,000, according to Johns Hopkins University.