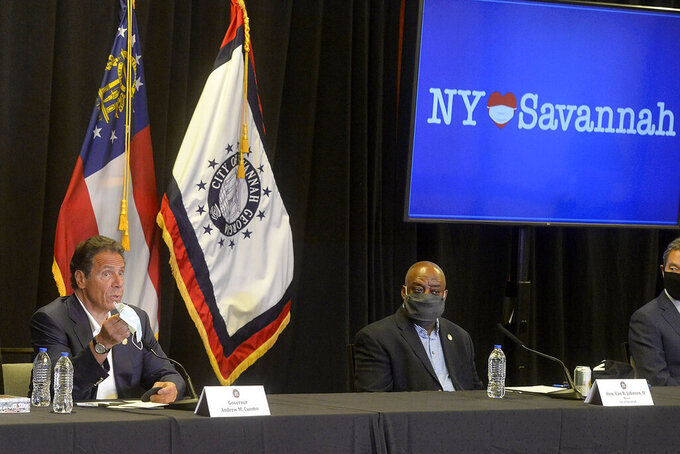 New York Gov. Andrew Cuomo waves a mask to make a point during a news conference at the Hyatt, in Savannah, Ga. on Monday, July 20, 2020. Listening in is Savannah Mayor Van Johnson. (Steve Bisson/Savannah Morning News via AP)

ATLANTA (AP) — New York's Democratic governor flew to Georgia on Monday, pledging to help the city of Savannah fight COVID-19, in a barely concealed rebuke to Georgia's Republican leadership as virus cases continued to rise in the southern state.

Cuomo said New York has to be interested in what’s happening in other parts of the country because infected people from other states are likely to spread virus cases in New York, and has previously promised to aid Atlanta and Houston. He portrayed his mission as an effort to help overcome political divisions on how to fight COVID-19

“This virus, it preys upon the weak and the vulnerable,” Cuomo said. “It’s the weak body that has trouble resolving the virus. The American body is in many ways, weak, right now. The body politic is weakened.”

Cuomo also backed mask use, saying that “somehow in this crazy partisan world we’ve even politicized a virus.”

Johnson was the pacesetter in a revolt by local Georgia officials against Kemp's refusal to allow local governments to order people to wear masks. Johnson signed an order requiring masks in the coastal city on July 1. More than 15 other cities and counties would eventually follow suit, with Kemp eventually suing Atlanta's mayor and city council, asking a judge to order local officials to stop taking actions at variance with his own executive orders on the coronavirus.

Lawyers for Georgia's attorney general are scheduled to argue that case in court Tuesday.

Contact tracing in Georgia is run by the state Department of Public Health, which didn't attend Monday's meetings, said Nick Zoller, a spokesman for Johnson. He said the city will not be setting up a separate contact tracing program.