New Zealand All Blacks float a 15-test schedule for 2021 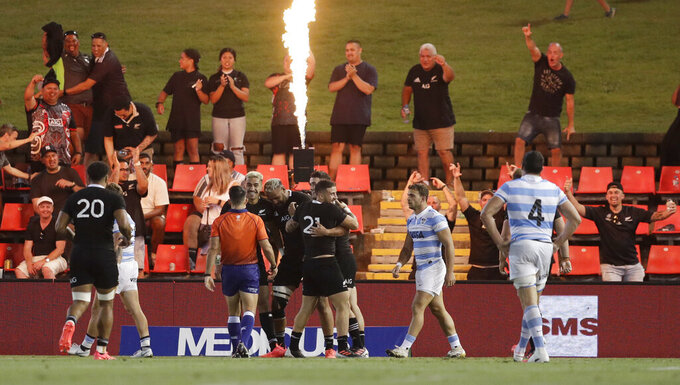 New Zealand's Patrick Tuipulotu is congratulated by teammates after scoring his team's fifth try during the Tri-Nations rugby test between Argentina and the All Blacks in Newcastle, Australia, Saturday, Nov. 28, 2020. (AP Photo/Rick Rycroft)

WELLINGTON, New Zealand (AP) — New Zealand will attempt a return to normality in international rugby next year, announcing a 15-test program for the All Blacks including an end of year tour to Europe.

The All Blacks are set to play Italy and Fiji in home test matches during the July international window, then plan to meet Ireland, France and Italy in a tour to the northern hemisphere in November. Two more matches in November are being negotiated, and might be played at venues in Asia or the United States.

The Rugby Championship will again take place at the end of the Super Rugby season and may again be played with all teams in one location.

New Zealand Rugby on Thursday stressed the schedule depends on the course of the COVID-19 pandemic. The All Blacks played only six tests this year, four in the Tri-Nations series involving Argentina and Australia and two more as part of a Bledisloe Cup series against Australia.

“The All Blacks schedule for 2021 is starting to take shape,” NZR chief executive Mark Robinson said, outline the plans for the Italy and France tests in July.

“We are also working with SANZAAR at the moment around hoping to finalize the Rugby Championship schedule as well as Bledisloe Cup and a third Bledisloe for next year," he said. "We are also looking at opportunities to play games outside of our (international) window in November. We’re looking at games on either shoulder of that fixture list in November or potentially two games before our first game in Europe against Italy.”

Robinson said the All Blacks’ “truncated” schedule in 2020 had made New Zealand Rugby determined to return to a more traditional test program in 2021.

“There’s obviously financial considerations too, which go in with these decisions,” he said. “But we’ve got to balance that with player welfare.

“There are opportunities in areas like the United States, Asia and the UK and Europe that we’re open to at the moment and we’re working really hard on those and making good progress. But again we won’t probably announce until we know a lot more into the first quarter (of the year) or beyond with regards to those fixtures.”

Robinson said while he appreciated the circumstances under which the Rugby Championship was staged entirely in Australia this year, he hoped a return to a traditional home and away tournament soon would be possible.

“We are working on the basis that we hope that by the end of July and into August that we’re traveling and we’re working as closely as possible with government and health officials around possibilities of what quarantine could look like and to get a greater sense of what vaccines could be available at that time,” he said.