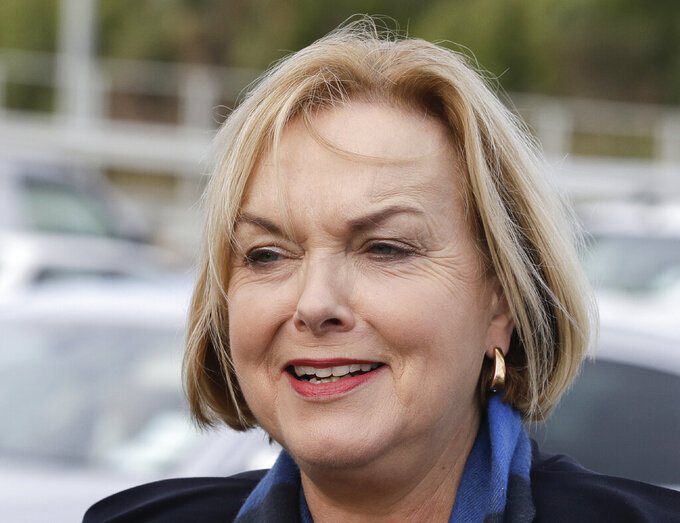 FILE - In this July 30, 2020, file photo, New Zealand opposition National Party leader Judith Collins arrives at a salmon factory in Christchurch, New Zealand. New Zealand has suffered a steep economic downturn due to the virus and is borrowing billions of dollars to try and stem job losses and rebuild. National is promising to increase infrastructure spending. (AP Photo/Mark Baker, File)

WELLINGTON, New Zealand (AP) — New Zealand is holding a general election on Saturday, and opinion polls indicate Jacinda Ardern is on track to win a second term as prime minister. Her popularity soared this year after she led an effort to stamp out the coronavirus. New Zealanders will also vote on whether to legalize marijuana and euthanasia.

A look at some of the key players and issues:

ARDERN vs COLLINS: Ardern leads the liberal Labour Party, which is polling far ahead of the conservative National Party. Ardern grew up in a rural area — her dad was a police officer and her mom a school cook. She joined the Labour Party at age 18 and worked as an advisor to then-Prime Minister Helen Clark. She became a lawmaker in 2008 and prime minister nine years later, at age 37. In 2018, she became just the second world leader to give birth while in office. National Party leader Judith Collins, 61, is a former lawyer and company director. She was first elected as a lawmaker in 2002 and has served as a minister, overseeing changes to the justice system. She was chosen as the party's new leader three months ago.

VIRUS SUCCESS: Ardern won international praise for the way she handled the aftermath of a 2019 shooting at two Christchurch mosques, when a gunman killed 51 worshippers. But that didn't necessarily translate into domestic popularity for her party, which at the beginning of the year was trailing National. That changed after the virus arrived and Ardern led a largely successful effort to stamp it out. With the motto “Go hard and go early,” she implemented a strict lockdown when there were only about 100 confirmed cases. She appeared in daily television briefings and her popularity rose. New Zealand has managed to eliminate community spread of the virus, at least for now.

REBUILDING THE ECONOMY: Like most countries, New Zealand has suffered a steep economic downturn due to the virus and is borrowing billions of dollars to try to stem job losses and rebuild. Labour says it will provide free training courses and apprenticeships and invest in infrastructure. National is promising huge, temporary tax cuts as a way to boost the economy and says it will pay down debt quicker than Labour. Like Labour, National is also promising to increase infrastructure spending.

MULTI-PARTY SYSTEM: New Zealand's proportional voting system means that parties must typically form alliances to govern. Labour has a natural ally in the liberal Green Party, as does National with the libertarian ACT Party. One party which is often a wildcard is New Zealand First, led by the charismatic but mercurial Winston Peters. Last election, New Zealand First formed a coalition with Labour and Peters became deputy prime minister. But polls indicate New Zealand First will struggle this time to make it back into Parliament. One question will be whether Labour can win enough support to govern alone, something that's not happened in the 24 years since the proportional voting system was implemented.

MARIJUANA AND EUTHANASIA: As well as voting for political candidates and parties, New Zealanders will also vote on two referendums. One would make euthanasia (and assisted suicide) legal in certain circumstances. It would apply to people who have terminal illnesses, are likely to die within six months, and are enduring “unbearable" suffering. The other would legalize marijuana, allowing people to buy up to 14 grams (0.5 ounce) a day and grow two plants. If the euthanasia referendum is approved, it would become law, whereas if the marijuana referendum is approved, it would still require lawmakers to pass matching legislation. The election results will be announced soon after polls close on Saturday, but the referendum votes won't be counted until later, with results announced on Oct. 30.