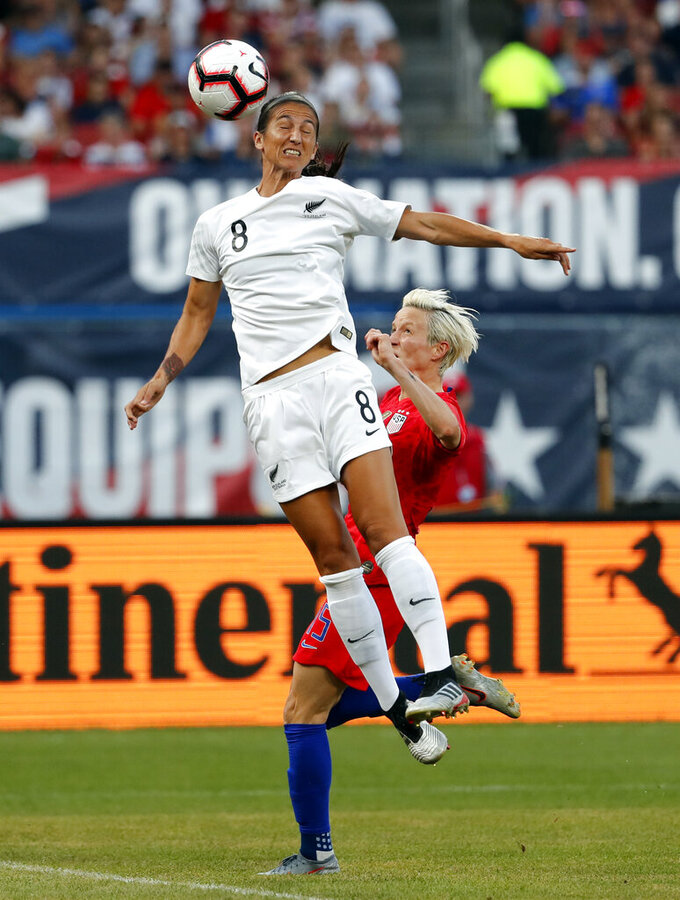 A New Zealand native, Erceg is captain of the two-time National Women's Soccer League defending champions. Re-signed in March, she holds down a defense that allowed a league-low 23 goals last season.

“She reminds me of Virgil van Dijk almost, for Liverpool, she has that kind of charisma on the team. If she asked you to do something, you’re gonna do it, no questions asked because Abby’s asked you to do it,” said Riley, who incidentally is from Liverpool.

Unsurprisingly, North Carolina leads the field at the NWSL's Challenge Cup, the league's re-start in Utah after the coronavirus shut down sports in March.

The Courage are stacked with talent, including U.S. national team players Crystal Dunn and Sam Mewis, but it's Erceg who steadies the squad from the backline.

She also provided a bit of offense this past weekend when the Courage defeated the Chicago Red Stars. Erceg's header for a goal in the 81st minute gave North Carolina a 1-0 victory to preserve the team's three-game winning streak.

“I mean, I’ve had some good captains in my years of coaching but she’s really, really top level,” Riley said. “I would say she’s obviously massive component for us and a huge influence on the club’s culture in what she’s been able to do. She’s the bedrock with the whole club for me."

Overall, Erceg is pleased with how the Courage have fared at the Challenge Cup. They've scored five goals and allowed just one, and are in position to secure the top seed heading into the knockout round.

“Things like finishing and relationships built between the players will come. That only comes with game time,” she said. “From from game one to game two, there was definitely an improvement. I think as the tournament goes on, we’re just going to see it get better and better.”

Erceg and the Courage are settling into life in the “bubble" in Utah, where they've been sequestered in facilities owned by Utah Royals and Real Salt Lake owner Del Loy Hansen. The group stage games are being played without fans at Zions Bank Stadium in Herriman.

Erceg played professionally in Australia and Germany before being loaned to the Chicago Red Stars in 2013. She was traded to the Western New York Flash in 2015 and moved to North Carolina when the team was sold and became the Courage in 2017.

The 30-year old is also a veteran of New Zealand’s national team and has represented the Ferns at four World Cups. She is the first player for the country, male or female, to reach 100 international appearances.

She's thrilled that FIFA awarded the 2023 Women's World Cup to the joint bid by Australia and her home country.

“We needed something like this to bring attention to the sport in New Zealand. You know, it’s not our main sport and to get such a big event is going to be huge for the game,” she said. “Whether or not I can play in that? We’ll see how the body holds up. But I’m really excited. It’s just such a good thing for the sport and a good thing for the country.”

Erceg's offseason was less than ideal. She couldn't go home to visit her family in New Zealand over the holidays because of the travel restriction for her green card application. Then she went into quarantine because of COVID-19. She posted workout videos on social media to help pass the time.

Being so far away from home also has its disadvantages from another standpoint — not many folks back in New Zealand regularly get to see her play.

“I’ve got my family and they watch the games when they can. And, you know, you’ve got some diehard fans that stay up and watch the games, but the time difference sometimes can be a little bit difficult,” she said. “Obviously with most of our national team overseas playing, and especially with the couple of girls in the NWSL, we would like a bigger fan base. We would like more attention on the players here. But like I said, it’s not the main sport. And so having the World Cup is just going to help with that."