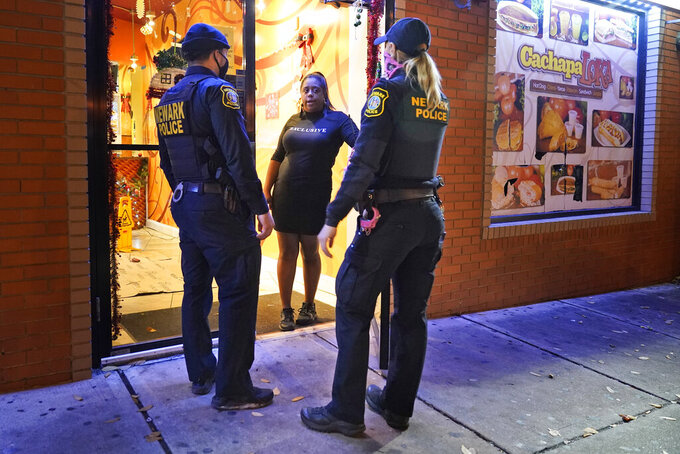 FILE - In this Nov. 12, 2020, file photo, police officers remind a woman in the doorway of a Newark, N.J., restaurant of the new curfew and dining regulations in an area where coronavirus cases have recently spiked. During a Nov. 19 radio interview, Newark Mayor Ras Baraka said that he'll ask residents of New Jersey's largest city to stay home for 10 days starting next week, right before Thanksgiving, in response to a rising number of COVID-19 cases. (AP Photo/Seth Wenig, File)

TRENTON, N.J. (AP) — Newark’s mayor said in a radio interview that he'll ask residents of New Jersey’s largest city to stay home for 10 days starting next week, right before Thanksgiving, in response to a rising number of COVID-19 cases.

Mayor Ras Baraka made the announcement during an interview on WBGO-FM. Baraka said that beginning next Wednesday, city residents should shelter in place and only go outside if absolutely necessary.

“We are going to lock the city down. We want people to shelter in place for 10 days. Don't go outside if you don’t have to. Don’t mingle with other people if you don’t have to,” Baraka said in the radio interview Thursday. “Stay with your family in your immediate household. This thing has been hitting families, so a lot of these families should be isolating themselves with their family anyway."

Baraka’s office didn’t respond to a request for more details Friday, and it wasn’t immediately clear how the city of 280,000 would enforce the new restrictions, particularly for the Thanksgiving holiday. A message was left with the Newark police department.

Baraka recently instituted curfews in three areas of the city and other restrictions on restaurants and nonessential businesses in response to a steep increase in the number of coronavirus cases in the city.

Two weeks ago, Gov. Phil Murphy halted indoor dining between 10 p.m. and 5 a.m., and last week he lowered the limit on indoor gatherings from 25 people to 10 and urged people to stay home for Thanksgiving.

Murphy has indicated towns can issue their own restrictions as long as they are consistent with state guidelines.

“Mayor Baraka is asking all Newark residents to stay at home and limit travel to essential activities. This advisory is entirely consistent with the Administration’s position that New Jersey residents should be particularly vigilant as COVID-19 continues to spread," Jerrel Harvey, a spokesperson for Murphy, said in an email Friday.

Meanwhile, New Jersey's health commissioner said Friday the state is expecting shipments of Pfizer and Moderna COVID-19 vaccines as soon as next month.

The earliest shipments are expected to go to health care professionals and first responders, with the vaccine likely becoming available to the public in April or May, Health Commissioner Judy Persichilli said.

The announcement comes the same day Pfizer asked U.S. regulators for emergency use of its vaccine, with Moderna not far behind.

New Jersey is aiming to vaccinate about 4.7 million adults, or about 70% of the state's population, within six months of availability, according to the commissioner.

The seven-day average of coronavirus cases for the second week in November, according to state figures, reached more than 3,500 cases daily, compared with about 900 cases a day in October. In September, the average was about 460.

Hospitalizations are also up, reaching more than 2,500, compared with about 760 a month ago and roughly 400 the month before that.