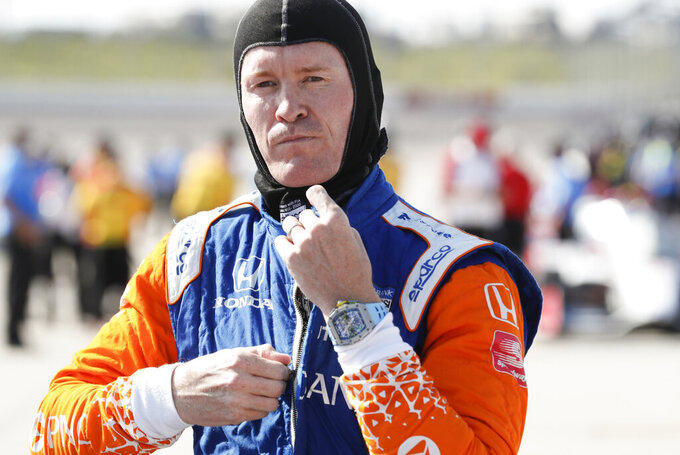 FILE - In this Friday, July 17, 2020, file photo, Scott Dixon gets ready for qualifying for an IndyCar Series auto race at Iowa Speedway in Newton, Iowa. Chip Ganassi knew Scott Dixon as a quiet kid in a paddock full of superstars when he hired him four races into the 2002 season. The pairing has since produced the most celebrated driver of his generation. (AP Photo/Charlie Neibergall, File)

The American has whittled 85 points off of Dixon's lead and turned Sunday's season finale into a championship-deciding event.

Newgarden is now 32 points behind Dixon in a bid to win back-to-back titles and IndyCar found 19,872 scoring scenarios that could determine the champion when the checkered flag falls in downtown St. Petersburg.

“It was like 20,000 scenarios -- 1% of the scenarios means we can win the championship,” Newgarden said. “You’re saying there’s a chance and that’s all we need.”

Dixon seemed to be cruising toward a sixth title when the New Zealander opened the abbreviated season with three consecutive wins. Dixon is considered the best of his generation, a driver who rarely makes mistakes, avoids risky racing situation and can protect a points lead.

But then Dixon did err during a doubleheader at Mid-Ohio last month. He held a 96-point lead when that weekend opened, but a sub-par performance in the first race followed by a “rookie mistake” spin the next day gave Newgarden an opening.

Dixon's lead shrunk to 40 points, a slide that ended all talk of a coronation before the season finale.

“Had I not spun, I think it would have been a different scenario going into the last race,” Dixon said.

Newgarden, with three wins this season, is now looming in Dixon’s rearview mirror. But even with the astronomical amount of scoring possibilities, Newgarden will have to be nearly perfect to win a third title.

Dixon needs only to finish ninth or better to win the title, regardless if Newgarden sweeps every point available and wins from the pole.

He feels no pressure to complete a flawless weekend.

“I’m surprised we’re here. It almost makes it more disappointing looking at the year now that we’ve clawed back to this point,” Newgarden said. “We were in such a deficit, there was such a hill. We’ve reduced the hill, without a doubt, but it’s still a mountain to climb. It’s going to be a very hard task for us to try to win the championship.”

The IndyCar season was 48 hours away from its March 17 season-opening race when sports shut down during the pandemic. Newgarden was standing in the lobby of his hotel, a few hundred feet away from the street course where cars had already been unloaded, when word came that the race had been canceled.

IndyCar put St. Pete back on the schedule as the finale, seven months after the teams sat idle all over the city awaiting a decision, and the new race date seemed tenuous until about a month ago. But state and city officials signed off on this weekend while also authorizing 20,000 spectators, making St. Pete the largest IndyCar crowd this season.

The 14-turn, 1.8-mile temporary circuit is the only street course that wasn't canceled on the 2020 schedule and there is little time to adapt. Activities for the popular street festival began Friday — Firestone announced a new three-year deal as title sponsor of the Grand Prix of St. Petersburg with race dates announced through 2023 at a morning announcement — but actual track time was reduced to one Saturday practice and a qualifying session.

The title contenders both acknowledged the strain that will put on their teams.

“It’s so compact now on race weekends with one practice session, there’s so much to get through, sometimes you can’t get through,” Dixon said. “A lot of times you hope you roll off in a good situation.”

Newgarden, the defending St. Pete winner way back on March 10, 2019, has faith in his street course program even though it has yet to be used this season. He expects to follow the plan laid out seven months ago.

“I felt like our street course car took a massive step in 2019. I know I was very happy,” Newgarden said. “The good news is we had already done a ton of work. We were ready to go run St. Pete. Now we’re just going to try to apply that.”