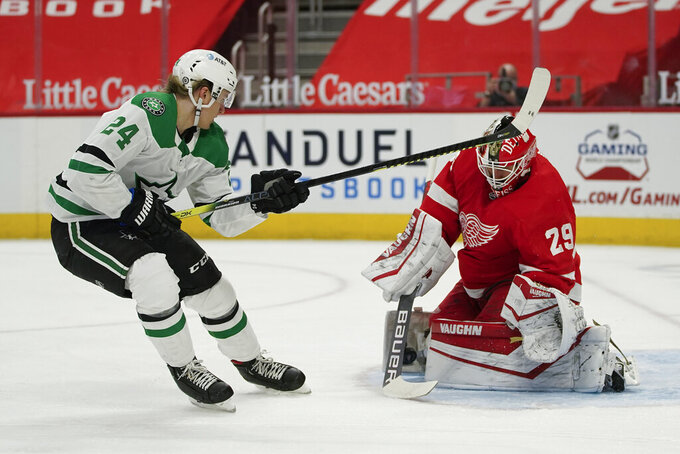 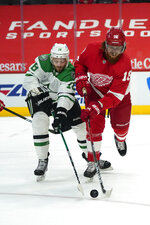 DETROIT (AP) — Jakub Vrana scored four goals in a game for the first time to help the Detroit Red Wings rout the Dallas Stars 7-3 Thursday night and match their total number of wins from last season.

Detroit picked up its 17th victory in its 49th game, a year after winning 17 of 71 games in the previous pandemic-shortened season.

“We aren’t in the playoffs, but we’re trying to play the best we can every night and try to build something," Vrana said.

The defending Western Conference champion Stars are vying with Nashville and Chicago to earn the Central Division's fourth and final postseason berth. The teams will play a fourth straight game on Saturday night.

Vrana, acquired in a blockbuster trade with Washington for Anthony Mantha, scored his second goal in the second period. He added two more in the third period.

“Since Day 1, everyone was really helpful," said Vrana, who has 16 goals this season. “There’s a new system and new teammates and you’re just trying to figure it out. It has clicked so far, but there’s still a lot we can do better.”

Radek Faksa and Joe Pavelski scored in the second period and Denis Gurianov had a goal with 6:31 left in the third, pulling Dallas within two goals each time.

Anton Khudobin gave up three goals on nine shots in the first and was benched by the Stars.

“It just seem to not be his night," coach Rick Bowness said.

Detroit ended its three-game losing streak against a team that had won four games in a row.

“We knew they were going to come hard because we beat them at home," Stars forward Radek Faksa said. “The game wasn’t bad, but all the mistakes, we have to learn from that for the next game.”

“It’s a classic example of beating yourself," Bowness said. “Poor puck management. We gave them goals.”

Mantha was the last Red Wing to score four goals in a game, pulling off the feat on Oct. 6, 2019.

Pavelski scored for the 20th time this season, giving him at least that many goals for the 11th time in his career. Among NHL players drafted in the seventh round or later, five players have had more seasons with 20 goals: Luc Robitaille, Peter Bondra, Doug Gilmour, Theo Fleury and Dave Taylor.

The Red Wings also acquired Panik, a 2021 first- and a 2022 second-round pick from the Capitals, but the 25-year-old Vrana was the key part of the trade from Detroit's perspective.

“He’s fast and he can shoot it," Detroit coach Jeff Blashill said. “Those two things are undeniable. Those were goal-scorer’s goals. He can change games with that kind of finishing."