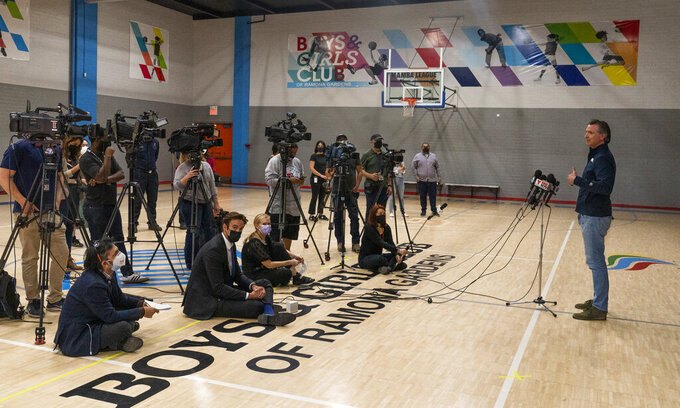 California Gov. Gavin Newsom, right, takes questions from the media after a visit to Ramona Gardens Recreation Center in Los Angeles to discuss the state's efforts to vaccinate hard-to-reach and disproportionately impacted communities, Sunday, Feb. 21, 2021. California's new system of delivering and scheduling coronavirus vaccines is being rolled out in select counties. It's the first step in Newsom's plan to smooth out what has been a disjointed vaccine rollout hampered by limited national supply. (AP Photo/Damian Dovarganes)

The multi-county region, which includes the cities of Fresno and Bakersfield, will get significantly more vaccines this week dedicated to farmworkers. The shifting allocation comes as California moves to inoculate others beyond health care employees in other essential jobs, including food and farm workers and teachers.

California had been distributing doses based on the estimated number of health care workers and seniors in each county, but is revising its formula as it moves through its planned vaccination tiers.

The state also will take 34,000 doses from a pharmacy that wasn't using them quickly enough and distributing them to food and agricultural workers through 11 new mobile clinics in the Central Valley, Newsom said.

The clinics will be set up to ensure vaccines get to people who don’t have transportation to a mass vaccination site or can’t navigate the sign-up portal, including in the small city of Arvin, southeast of Bakersfield, where Newsom spoke.

The governor has made equitable access to the coronavirus a priority, saying the state hasn't done a good enough job reaching low-income people in neighborhoods, largely Black and Latino, hit hard by the pandemic.

To better reach those populations, California on Sunday began transitioning to a distribution system run by insurance giant Blue Shield, starting in the Central Valley. All vaccine providers will now have to use a state website called My Turn to schedule vaccination appointments. Newsom acknowledged that “invariably there will be bumps along the road."

Arvin Mayor Olivia Trujillo appeared to get emotional as she talked about what it will mean for farmworkers to get vaccines in their home community.

“The fear is going to be taken away (for) them," she said.

Statewide, about 70% of all vaccine doses are now going to people age 65 and older, while the remaining 30% are split among educators, emergency service workers and farm and food processing workers, Newsom said.

It's not clear which pharmacy the 34,000 extra doses are coming from.

Newsom had previously re-allocated more than 170,000 doses from CVS Pharmacy to Kaiser Permanente. Half of the doses went to mass vaccination sites at Cal Poly Pomona and to the Moscone convention center in San Francisco, which paused vaccinations last week after running out of supply.

Newsom, a Democrat who is facing the threat of a recall election, spoke forcefully about his commitment to ensuring people in the region get resources needed to fight the virus. Kern and Fresno counties, which have a combined population of nearly 2 million, have higher positivity test rates than that of the state, at 10.5% and nearly 9% respectively, compared with 3.3% in the state overall.

Local officials had called on Newsom to visit, including Bakersfield Mayor Karen Goh, a Republican who joined him in Arvin. Newsom described himself as “not some guy from San Francisco who doesn't give a damn about the Valley."

“We don’t have to agree on everything but damnit, I care about ... your kids, your family, your community."

Goh thanked Newsom for visiting and noted that residents there have higher rates of health problems that can exacerbate coronavirus treatment, such as asthma and diabetes.